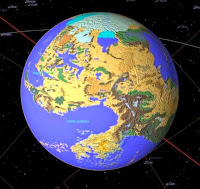 Comparing different versions of a map of a fantasy world?!?

Pretty useless, this, but hey! I always wanted to do this, so when I had a little moment of nothing better to do (actually, lots of other important things to do, but I just wanted to do something useless, for once 😅)...

Each edition of Dungeons & Dragons came with its own version of the Forgotten Realms. As technology changed over time it should be obvious the maps would change as well, if not for the exact location of a city (though Waterdeep does seem to wander around a little) then at least when it comes to look and feel.

(There also a bit more going on behind the scenes, read this post, and especially the answer.)

So, I grabbed / scanned / copied the different maps, rotated them so they more or less lined up, and checked the well-known sword coast.

But first... let's have a look at Ed Greenwood's original map: (click to enlarge) 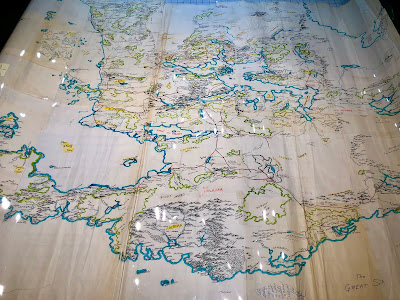 I haven't got my grubby little hands on a (large) 5e version (I'm not even sure there is one), so I have to base myself on what I found on the Internet, but it seems the 'official' (free) WOTC map was missing some detail. Good thing 'tobzors' updated it. That is the version I have been using in this comparison.

The 1e version looks pretty boring. 2e has a bit more detail and flavor. The Campaign Cartographer version (that was used on the Interactive Forgotten Realms Atlas) is quite close. The 3e version goes for a more 'grunge' look. Style wise, I do like the 3e, whilst 4e/5e seems a little too 'busy'.

The CC version appears to offer most information, followed by the 2e version. Note that those maps do not reflect any changes in the world since publishing.

Though my reference area (the Swordcoast) has seen limited changes (geographically, that is) you may notice that scale and relative size of other geographic areas have changed quite a bit, some areas have become larger, some other ones smaller. According to WOTC, this was done deliberately, to make the maps more useful.

Does it matter? Gamewise? Probably not 😄

Typically each edition of Dungeons & Dragons brought some sweeping changes to the Forgotten Realms.

I'm not sure about the changes from 3e to 4e. Have a look at the images above. On the left side (in the red circle) you can see some of the changes from 2e to 3e. The whole continent was rotated about 15 degrees to make it a better fit to the poster map that was included with the 3e Campaign Setting book. Some areas, such as the Shining Sea, were resized to leave more space for more 'interesting' features.

But what happened in the pink circle? Okay, I admit in the 2e version that area appears a bit empty and boring 😅 but still... Is this part of the 4e events, or just another example of the 2e to 3e remake?

I still have to have a good look at the lands further south, to see what other changes were wrought over there.

The 4e events that never happened. Sort of.

Nobody was happy with 4e... Ed Greenwood et all did their best to reverse some of the changes. But there's nothing 'official' regarding Faerun in 5e.

So, things are pretty much back to 2e / 3e days. Sort of. Now nitpickers (like me) will complain about all these inconsistencies. But to be honest, these aren't failures or mistakes, these are opportunities.

Hey, it's the middle ages with fantasy, those yokels thought the earth was flat, travel was done by horse and spell, and it wasn't in the interest of local nobility to offer tactical advantage to their enemies by offering  detailed map at every souvenir shop.

But... the non-rational explanation is much more fun! 😈

I always approach it like this: in Roger Zelazny's Amber books Corwin tells his story from his point of view. Avid readers have noticed some inconsistencies in his tales.

In the Amber role-playing game Erik Wuijck (the creator of the game based upon Amber) poses an interesting question: what if Corwin has been lying? It might have been mistakes, covering for other participants, embellishment of Corwin's tales, leaving out a few embarrassing facts... or outright lying, because why would he spill secrets you (as a mere Earth mortal) are not supposed to know?


What if Elminster has been lying?

What if Elminster has been lying? Why wouldn't he? His lines suggest he left out some of the more juicy (and dangerous) details. You could even claim it's canon 😈

Hold on to that thought. What if all the paper versions we have are distortions of reality? That these are only an approach to the reality of the Forgotten Realms, of which we see some parts through a fogged and broken mirror? With a decent helping of misdirection, a heavy sauce of redaction, and a pinch of outright lies?


Which means what, exactly?

For players: the DM is always right!

For DM's: how about throwing a curve ball at your players, those damned know-it-alls? Who cares if WOTC set an event at a specific date? Perhaps WOTC got it wrong. Perhaps Ed Greenwood misinterpreted Elminster's words. Perhaps it's all deliberately misleading...

So pick the parts you like from whatever edition you like, and ignore the timeline, changes, just change it to whatever you like, and have fun. Add a little Corwin 😇 to your game...  Swap Cormyr and Thay? Perhaps replace some do-gooder NPC with an evil counterpart? 😈 So Elminster is, after all, one of the nine lords of Hell? Who knew!?! 😂

As for the changes... what changes? It's my world, so I decide what's canon. And what's not. And in your game it is your world and you decide.