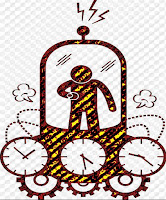 Time travel will put everyone's brain in a knot...

Here's a list of all shows I know of and / or have watched in which time travel is a major repeating plot element.

Perhaps it is time (no pun intended) we'd find some other tropes to beat to death... The 'bad-future-reaches-through-time-into-the-past-to-make-the-future-better' theme has been done (too) many times...

And even though I think time travel can't exist (because if it could it wouldn't) it is always fun to play with alternative what if's.

I've added a link to the shows I (re)viewed.

Shows that only use time travel as a theme for yet another 'episode of the week' do not qualify (Star Trek comes to mind). There's no movies in this list either but I did include non-physical time travel (such as Flash Forward).

There are probably a few more I've forgotten, or never knew about. Only time can tell if I will ever add them...  Enough bad punts, here's the list of shows in which time travel is a major, repeating plot element:


Any that I missed?