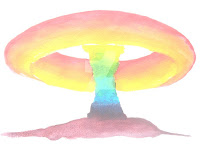 Do we want to destroy the world, as in: blow it up? Or do we simply want to make the place uninhabitable?

According to most web pages we don’t have enough nukes on the planet (yet) to actually turn good old earth into yet another asteroid belt. Well, isn’t that nice?

Let’s settle for the second scenario. I Googled a bit, and read up on whatever I could find. You won’t find many hard numbers, but guessing goes pretty far.

We’ve got between 10000 and 15000 nukes on the planet. A small nuke, Hiroshima size, would be perhaps 15 kiloton. These days the average nuke in the US arsenal is, according to the web, 330 kiloton. Let’s assume the number of nukes is 10k, then we have 3300 megaton of nuclear bombs at hand...

Fortunately, we don’t need that many. You see, we don’t have to kill everyone at once., we can take our sweet time. And fate is on our side.

We’ll start with the nuclear explosions themselves. Giant fireballs, blasts of heat and expanding shockwaves will destroy everything in a few hundred kilometers. With a bit of luck the heat column will cause a vertical draft of heat, sucking up ash and blowing it straight into the atmosphere. With a little more luck the ash will start reflecting the sunlight, causing a nuclear winter. This, of course, will make Donald Trump absolutely right: there is no reason to fear global warming.

As a good alternative we’ll set the nuke to go off underwater. Properly placed that would cause a nice tsunami, cleaning up the shores for miles and miles.

Of course, we have another ace upon our sleeve. It’s the slow, invisible killer of radiation. It depends on the type of bomb (some are dirtier than others) and where you detonate them, but when done properly there will be a huge amount of radioactive material spread around, to be shared by all.

This radioactive waste will slowly (depending on how far you were away from the explosion) work its way into the cells of any living organism, messing up its self restoring and reproductive capabilities. At that stage we have a decent chance on either direct radiation damage, or a wide variety of tumors with a hint of DNA damage. Anyway, we’d die, and if we would not, we most likely wouldn’t be able to reproduce.

Admittedly, it would take some time, but after a while, regardless of where the bombs would go off, everyone dies.

Extrapolating the mess Fukushima, Hiroshima, Chernobyl, and other ‘incidents’ left, about 50 nukes would be sufficient. Let’s make it a 100, just for sakes argument.

Now comes the interesting part. Remember it doesn’t matter where those 100 bombs go off. In other words: I could launch a 100 missiles towards the Soviet Union, China, the US or North Korea. And all of us would die.

I could just as well blow them up on my own territory as that would kill everyone just as sure. Perhaps it would take a little more time, but who cares, only the end result counts. We all die. When I blow up these bombs on my own turf the only difference is that I would die earlier. That might even be preferable over slowly dying from radiation poisoning which doesn't sound that attractive either.

In other words: once I blow those 100 units, it’s fait accomplis. It's an implied kind of mutually assured destruction. I only have to spread around a 100 nukes, and protect them in such a way they cannot be easily taken out by conventional weapons. Then the enemy has two choices: nuke those 100 sites (needing a 100 nukes which essentially is committing world wide suicide) or I will blow up those 100 sites myself (which would also kill all of us).
Mission accomplished. Again. We can't lose! (Or win, depending on your point of view.)

No need to develop a delivery mechanism, pay for all that maintenance, be on alert all the time in case someone launches, no risk of trigger-happy generals and unfortunate mistakes. Easy. Cheap. Silent. Safe. Win / win. (Or lose / lose.)

Once you realize rockets don’t matter, you also realize it doesn’t matter much if you can detect them.

Well, perhaps we want a little detection, and a little delivery capacity anyway. Not to stave of WWIII, because we’re dead anyway, but because it would stop idiots of launching an individual strike on some high value target, like for example New York.

The problem is: you don’t need a rocket to deliver, you could just as well put a nuke in a slow boat, sink it off the coast near NY city, detonate it and let the ensuing tsunami wipe the city of disbelievers from the face of the earth.

You don’t even have to be an extremist to do so. Kim Jong-Un could do it, once he’s done with his hairdresser.

No, we don’t. It’s not that the incidental nuke would kill humanity, in spite of the millions of deaths it might cause.

It’s the 100 nukes response that will kill us all.

Just one bomb... That one explosion would require retaliation, which might invoke another retaliation and further escalation. The outcome would be the same, once we reach the magical number 100: we all would die.

Maybe we should make sure parties that understand the problem have a 100 or so nukes, and everyone else has none.

This is why I am a strong opponent of smaller nuclear weapons: people will be attempted to use them. A single limited nuke. Another one in retaliation. Two more, just a tad larger, to prove we're serious. A big one to blow up the opponents city... It's an easy script to follow.
This gets even worse when considering asymmetric responses. For example, in a conflict between India and Pakistan either party may decide to use a small nuke to avoid being overrun by hordes of soldiers from the other side, hordes that no conventional weapons would stop, ie. a nuclear reaction to a conventional attack.
So, a most explicit ‘we won’t use nukes first, no matter what’ would be quite appreciated. Dear Pentagon, are you listening? Kremlin, you too?

Talking about asymmetric responses! When I read a newsflash saying things like ‘the Pentagon is considering a nuclear response to a cyber attack’ I can only shake my head in disbelief. Not only because it is a good example of disproportionate response, but also it shows the worst possible mindset of all: blaming others for your own stupidity.

Perhaps one day the downfall of humanity isn’t due to nuclear weaponry, but to sloppy coding. You know what, let’s nuke some third world country where a bunch of 16 year old script kiddies are using the loopholes in our systems during their next cyberattack.

My gawd. Idiots. What are they thinking? Perhaps they think Trump’s ‘blame it on somebody else’ tactic also applies to military issues. And maybe it does.

You might just get away by blaming the nuclear explosions on someone else. And sleep peacefully. Until the radiation kills you a few days or weeks later, as radiation doesn't care who is wrong, who is right, and who is to blame.

In the end, we're all the same. We all die. Those who are blameless and those who are not.