I read two different, very different books by the same author. At first I wasn't even sure if it was the same author as these appear to be intended for very different audiences. Why he choose to publish both under the same pen name is a mystery to me.
Because Perilous Waif is fantastic, whilst Fimbulwinter is a piece of shite.

Let's start with the bad one.

Fimbulwinter is fantasy, almost pornographic, and a wet dream for the archetypal D&D male nerd who dreams of being a magician. It's what happens to the main character, Daniel Black, who ends up being an overpowered and somewhat arrogant wizard in another universe. Conjuring tits and having sex with demons. (And which male reader wouldn't want that!) 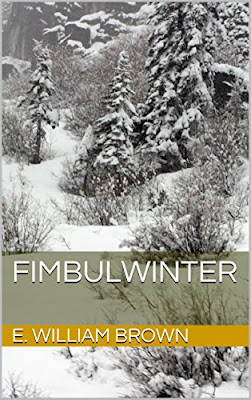 It's horrible, too. The book, I mean. The cover is just boring, and fortunately does not feature aforementioned demon. (Well, perhaps it should so it would deter readers looking for something a bit more sophisticated, or at least civilized.)

Surprisingly (or perhaps not so) it attracts a certain audience, and actually turned into a series of books. (I think five or so by now.) I don't mind some 'carnal' elements if it supports the story, but here it is half the story.

What's so sad about it is that A Perilous Waif, also by Brown's hand, is great. It just makes no sense, but how could I direct someone to A Perilous Waif, knowing that that same reader would look for other books by the same author, and then would end up with this garbage?

Perhaps it is just me and this is a great work and I'm too prude. I like Game of Thrones but I find it a little too explicit as well now and again. It must be me. I am the incarnation of prude. It's either that, or the book is just rubbish.

The verdict? Only suitable for hormonal driven young boys / men who like their D&D dreams to become reality. As for the obligatory disclaimer: personal opinion etcetera etcetera.

I'm actually happy I can say some very positive things about his other book which I read... If Brown ever reads this review at least he might appreciate that.

A Perilous Waif might almost be called YA, it's science fiction, has a likeable protagonist, and is surprisingly fresh. Even the cover is great and matches the story. (A rare thing indeed.) 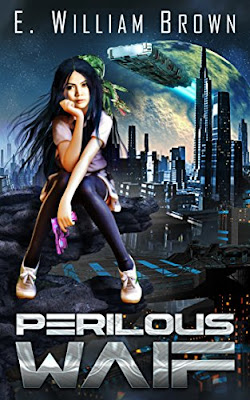 The main character is Alice Long, an orphan with some very advanced cybernetic and DNA enhancements. Everybody has those, but hers are a bit... different. When she gets older she develops some interesting capabilities, and the (very) advanced technology actually makes some sense...


It may not all be believable, but it is a lot of fun!

There's a second book coming up, but this book is great as it is and doesn't need a follow-up. Let's hope the author manages to keep it in the same vein and style and the walls between Alice Long's and Daniel Black's universes stay in place, literally as well as stylishly.

I'm still baffled by the difference in the tone between the two books... I even checked out the author's website to make sure that was the case. It is. I still can't believe it.

But... how can I suggest A Perilous Waif to my teen daughter, with the risk of her picking up Fimbulwinter as well? What will people think of me when I suggest them an E. William Brown book? Sigh.

So please pick up and read A Perilous Waif and let's not think to much about that other book...