Airflow (a new PC build in an old case) 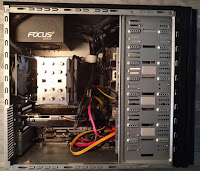 Let me start by saying I do NOT like to build my own PC. Once upon a time, long, long ago, I considered it fun. These days I just may build one myself for cost reasons.

Regardless if you use a new or an old case (as I did) it still is a good idea to pay attention to the airflow in your case...

When my trustworthy Dell XPS710 gave up on me (after ten years of reliable service and starring in a major role in Tabula Rasa) I was devastated. I liked that case, but, unfortunately, reboots were becoming complicated affairs, and spontaneous crashes didn't help much either. Time for something new.

Except for the AMD64 I've been always on Intel's side, but this time I opted for an AMD build.


HDD, SSD, DVD ROM and case were leftovers. This isn't the cheapest configuration, but it isn't a high end gaming machine either. The 1060 is an afterthought, and perhaps overkill. The memory definitely is, but I like to program, mess around with virtual machines, and do a little graphical editing that loves to eat up my system's memory. Faster memory would have served gaming better, but I'm not that much a gamer (got a PS4 for that).

Honestly, you could save a lot of money with a more economical build, with pretty much the same performance...

Unless you go for 32 GB you're probably best served with 16 GB of 2600 memory, but check the mainboard documentation and the internet what works and what doesn't...

Update. The newer Ryzen 2600X and relatives are definitely served by some faster memory.

Why the Ryzen 5 1600X? Well, I fooled around a bit with overclocking, and it just wasn't worth the effort, so in the end a regular 1600 would have been sufficient. Oh well...

I had an old case laying around (10+ years I think, Piano black paint, completely perforated front with way too many 5.25 drive slots) and decided to re-use that one. (I bought it to use it some day as a server case, yet that never happened.)

I had three reasons to still use an old style case..

This case handles an ATX board. At first glance there's a lot of space (and after mounting there's still a lot of empty space left) but the connectors on the mainboard made things a little complicated, so did the length of the card itself, and its 'silent' mode. 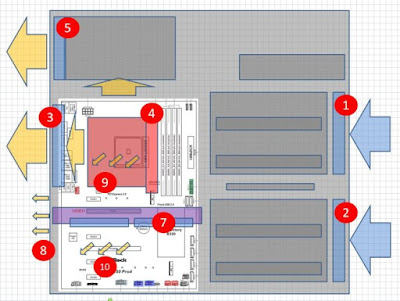 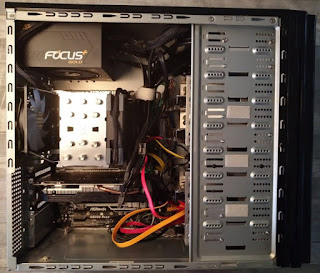 The front of the case is mostly perforated drive bays. On the back there's a small perforated area and a slot for a fan (3).

An earlier build of my home server just used the PSU fan and a single (temperature controlled) fan on the backside, and in that machine I used a piece of tape to close these side vents: 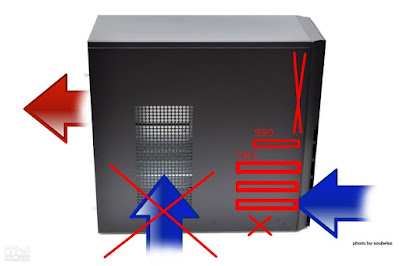 This time I kept the side vents open. 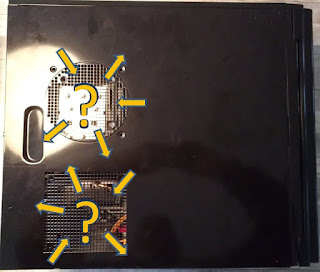 It makes air flow through the side vents somewhat unpredictable, but if the case is provided with some overpressure, air should always flow out, or so I hope.


The basic idea: push a little more than I pull

By putting two pushing fans on the front and only one pulling on the back I push a little bit more air into the machine than I pull out. All surplus air is leaving the case through back and side vents, or at least that's the idea.

The PSU (5) has a 'silent' mode. If consumed power is at a minimal, the fan falls totally silent. To make sure the power supply isn't heated up by CPU (9) heat there's that extra fan (3) on the case to move air out before it reaches the PSU.

I mounted three Frozen Arctic PWM120 fans. The two on the front (1) (2) are mounted on two Lian Li drive cages I still had laying around. These things are intended to mount four 3.5" disks in three 5.25" drive slots. I didn't need that many drive slots, but they allowed me to mount some fans in the front. Newer cases typically have fans here. (Again, this is an old case.)

The two fans on the front pushing air into the case, the air flowing over the hard drives towards the video card and CPU cooler. 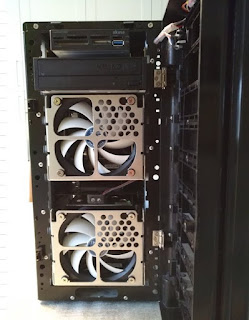 The third is mounted on the backside, sucking out any hot air coming from the CPU cooler. (Note that I also added two slightly perforated slot panels next to the video card bracket (8). More about that later.) 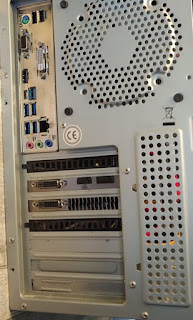 The mainboard has three chassis fan connectors (some websites claim two, but there are actually three). These Frozen Arctic fans have a special, stackable connector and use very little power, so you can connect two to three fans to a single controller. In this case each fan got its own controller. 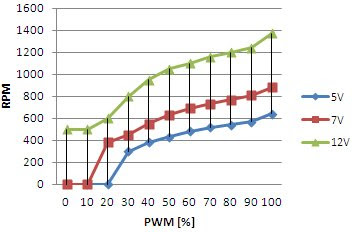 According to the documentation, these Frozen Arctic fans should run at 500 RPM at PWM 0%, but in reality they behave erratic at PWM's below 20%, and run a bit faster than suggested by the diagram.

This could be the mainboard not sending out a proper signal to the fan, or the control boards on the fans, who know...

I first installed HWInfo64 to check on the temperature sensors, then went into the Bios and set all CPU and chassis fans to 'silent' mode. Then I tested the system with no, little, and maximal load. (I generated maximal load with a combination of Prime95, Furmark and Heaven.)

Then I played around with the fan settings, increasing them until I found the temperature that I wanted under full load. 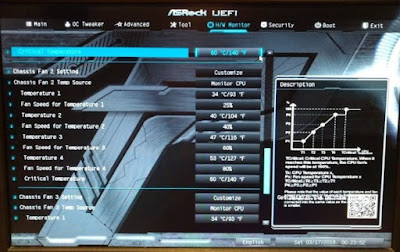 I then used the same settings for all the fans.

When the GTX1060 (7) has nothing to do its fans fall silent. I noticed that those fans were starting and stopping now and again, even with very little use. Apparently, some heat would build-up which would be enough to start and stop the video card fans.

I played a little with the front fan speeds, and by increasing the minimal speed of the lowest chassis fan (2) a little I kept the video card cold enough to leave the video card fans off.

The adjusted setting for the second chassis fan (2):

With this, the bottom fan ended up running 870 RPM with the machine idling. I may have to adjust this when summer arrives and environmental temperatures go up, but I hope to be able to keep the video card fans off even during the peak of summer. Let's see what happens.

The Gigabyte design with its dual fans cools well and the card itself performs well, but it has a minor drawback. The aluminum cooling profile doesn't direct the airflow towards the backside of the card, out of the case (even though the card's bracket is perforated). In fact, half the hot air is directed towards the mainboard PCB, the other half just into the case. 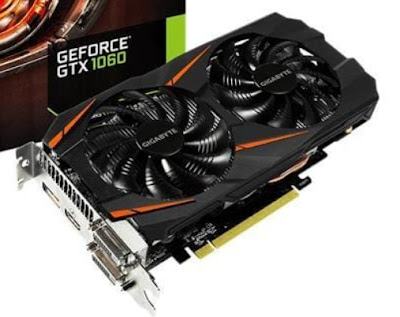 So the fans on this video card do NOT push the heat out (of the case)!

Which means you need case fans. But I was planning to use them anyway.

(And, of course,  I just noticed the battery on my mainboard is directly in the hot air stream. That is going to help... Right...)
(In fact, many video cards have this issue. That's why I prefer 'blower' style video cards, even if they might be somewhat noisier.)
Here's an image of a GTX750. Here you can see that the cooling profile is properly aligned with the card. The shroud is still open towards the front of the case though, so you'd still need case fans, but it's better than heating up the PCB of the mainboard. (Of course, the disadvantage is that the warm air can't go anywhere, sigh.) 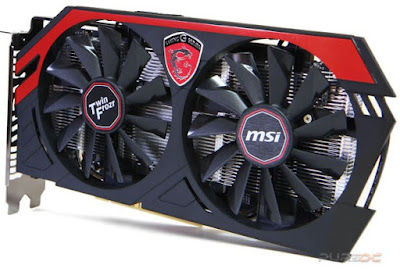 There are better designs where all air is pushed out of the backside bracket, or where the air is pushed into the case, but not towards the PCB. If you can afford one, buy one of those, though they often produce more noise. Who says life should be easy? 😁

Typical use: running a torrent in the background, doing some browsing, playing some music:


Playing a movie results in the same numbers. Guild Wars 2 (a light game) had the CPU at 37 and the GPU at 68.

I think I can safely say this is a mission accomplished.