Mounting a Tab3 7" tablet in a kitchen

With all the recent security scares you may want to carefully consider what you want to do with it.

But... if you decide you still want to put a tablet in your kitchen, then here's an example with a Samsung Tab 3 7".

My final goal is a touch screen that lights up when some event takes place. For example: camera view on doorbell, status update if my Homematic system pops up an alarm, controlling lamps etcetera.

(More about the kitchen itself here.)

You decide yourself. It's best if you can make it skip a login screen, and you have to figure out a way to turn on the screen on an external event. I plan to add some hardware later on, though haven't decided what and how yet.

Interestingly, most tablets turn on the screen when you disconnect then reconnect the power, so that's an option I have to keep in mind.

It also helps if it's a cheap second hand tablet so failure is an option... 😀

For now, I've settled on an Android 7" tablet, a Samsung Tab 3 Lite 7". It's not going to run anything sensitive, and doesn't use any other systems at home so it won't be affected by Krack. Or so I hope...

(This is a bit of a POC, a Proof Of Concept, if I can get it to work properly I might op for a better tablet in the future. For now it's all cheap and cheerful...)

A friend arranged a small stainless steel plate, properly cut. If you go this route, look at the router bits that you have, and have the plate 0.2 mm smaller, so it sits snugly in the panel. 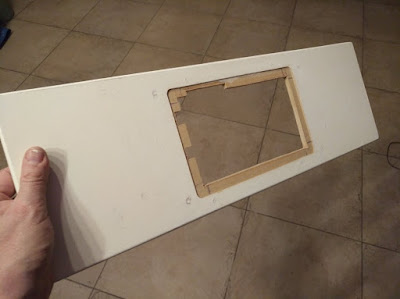 Routing out the other parts takes a little more effort. Make sure there is enough space for the cables and to access a button without fully disassembling everything. 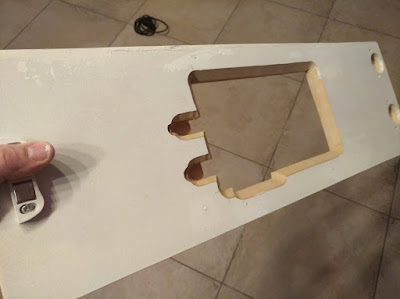 After painting the front I actually glued the stainless steel to the MDF using contact glue ('Bison Kit'). This actually worked surprisingly well, but my idea was to have minimal mechanical force so it didn't have to be that strong.

If you plan to (forcefully) press the tablet against the metal plate, you may consider some full-through screws or bolts to keep the stainless steel part in place, even when pressure is applied from the back.

I used double sided self adhesive tape to glue two L-shaped aluminum strips to the back of the tablet. These L-brackets are screwed into two small pieces of wood, who in turn are fastened to the MDF panel with 4 more screws. 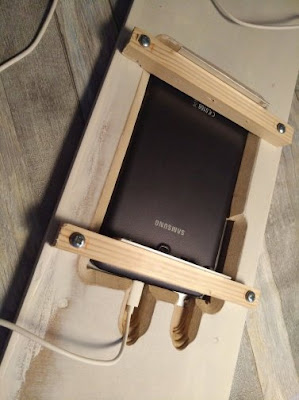 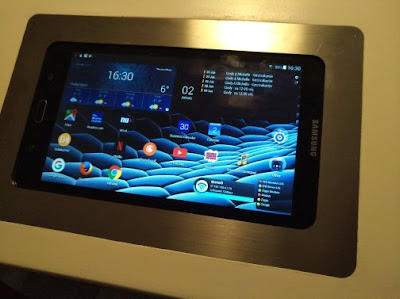 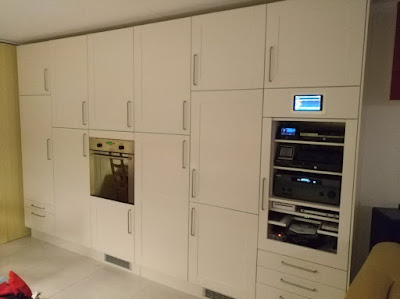 That's half of a (very) modified Ikea Faktum kitchen. It's not completely done yet (there will be a removable, semi-transparent, 'breathing' cloth cover to hide the electronics some day) but it's acceptable for now.

Again, I haven't finished this project completely yet, but I did install some applications that help fixing 'user errors'. I wanted to block the users from installing apps, modifying the layout or changing any settings. I was not entirely successful (with some effort people can still screw up the layout) but came close enough to make it workable.

It's not easy to completely lock up an Android tablet, but I guess I am halfway... I created a dedicated Google account just for this tablet, and use the following apps:


The calendar software is a bit overkill, but I share a Google calendar with my kids with upcoming (family) events.

When I have time I will revisit this project and add some electronics and work on soft and hardware to automate things somewhat.