I like my eBooks good, and my audiobooks cheap. Finding a decent title cheap is sometimes a challenge though, so The Emperor’s Edge was a nice discovery. I’ve listened to the first 5 books thus far, and they are quite enjoyable.

The main protagonist is a female (former) corporal who tries to do good, yet ends up as the (wanted) leader of a band of criminals / mercenaries. What makes her an outstanding character is the endless way she’s cooking up insane plots. What makes the stories great is all the banter between the different characters. Some readers might even like the romance between her and the empire’s most notorious assassin.

The world itself fades somewhat into the background, though it’s an interesting setting as well, with a non-magical empire trying to come to grips with a bloodied past, and neighbors with a grudge and magic to back it up. Don’t worry, there were no elves involved thus far...

The publisher changed the narrator with book 3. Unfortunately the new voice is a little more serious, not the 'bubbly' style which matched the character better. Good enough still, but not an improvement.

Read it if you like light, entertaining stuff. We'll put this one in the category 'bubbly fantasy'. Looking forward to the (audiobook version of) book 6. 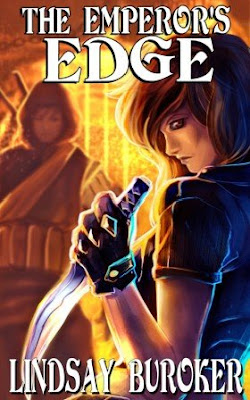