Concept: in the future criminals have become too powerful, so the Police Force has opted for the deployment of tanks.

Interesting though dated series, hand drawn animation, some interesting characters but a child of its time, and 'too soft'. Many shootouts in A-Team style... bullets everywhere and nobody gets hit. I understand it was probably a children's show, but still.

What made it nice was the banter between the main characters. For example between a politician and the chief of police:

"A surgeon operates with a scalpel which he takes good care to sterilize to prevent unnecessary infection. If he uses a tank the patient tends to die."

"I resent that. It was you, politicians, who gave us those tanks in the first place! Besides, these days, tanks are about as effective as toothpicks."

"Toothpicks? If tanks are no better than toothpicks what would you suggest to consider as appropriate equipment for the police to use in preventing crime?"

"I'm glad you asked me that. I wouldn't mind replacing our guns with tactical nuclear weapons."

"Nuclear weapons can stop a war as they have done. They should be able to stop criminals... though I'm a pessimist."

I just re-sampled an episode, and yeah, it hasn't aged too badly though it clearly is a child of the eighties, intended for children of the eighties. If you're looking for silk smooth animation, layered plots and impressive FX then you're in for a cold shower.

If you're looking for silly action, then yeah. Try it. Feel free to ignore the muddy undertones of a world where a Police Force would need tanks...

And the cover, suggestive as it may be, has very little to do with the contents.

There are at least two later incarnations, but they are not exactly sequels, more alternate timelines. I haven't seen them, so can't comment on them. I looked for more information on the Internet and noticed the artwork of the TV series, manga, and both OVA's are used indiscriminately. If you pick up an episode or disc, make sure you got the version you are looking for. 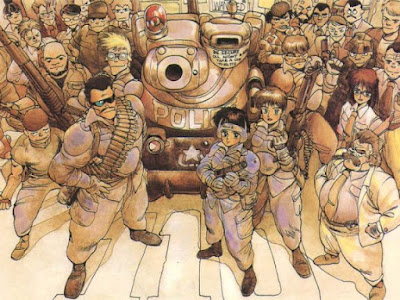