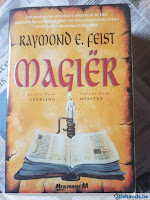 Dark Fantasy, sometimes a bit predictable with a so so ending, but overall enjoyable and worth a re-visit.

The majority of Feist's works are part of The Riftwar Cycle, and feature the worlds of Midkemia and Kelewan. Human magicians and other creatures on the two planets are able to create rifts between these worlds and end up fighting each other. Yeah. That happens

The original Riftwars sage is well known. The original works of Feist were inspired by / based upon his Dungeons and Dragons gaming days, which took a bit of inspiration from the Tekumel books. Nevertheless, this isn't yet another generic D&D based series of novels.

The Empire trilogy was better than expected, though I guess book 3 wasn’t entirely necessary. Especially the final chapter of book 3 could have been done better.


I read of few of these in Dutch, but I actually prefer the English books. The covers and especially titles of the dutch versions were... nah. Just nah. And I simply can't think of (m)any cases where the translations were better than the originals. 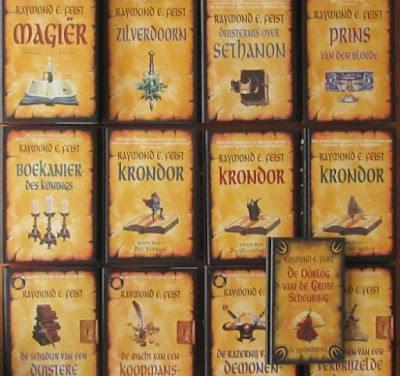 For the moment, I’m Feist-tired. I tried number 14, Krondor - The Betrayal but it would not hold my attention. Perhaps later.

There are many books part of this series. I've not read them all, but at least I've listed all books that I know about... There are nine arcs with in total 31 books.

I. The Riftwar Saga

8. Prince of the Blood
9. The Kings Buccaneer

VI. Legends of the Riftwar

VII. Conclave of the Shadows