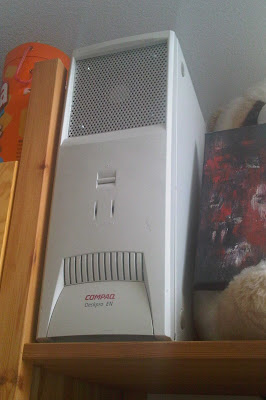 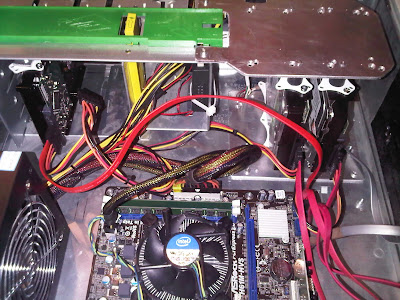 Note that one line... re-using an old Xion 500W power supply... which must have been from 2004 or 2005, just after arrival of the SATA standard. It first served in my primary PC until I bought a Dell XPS710 in 2007 (which still is in use until today, by the way).
I may have used the Xion PSU in some machine when I bought it, but since then it pretty much mostly sat on the shelf from 2007 to 2012. It's dark chrome body still looked like brand new when I used it again. 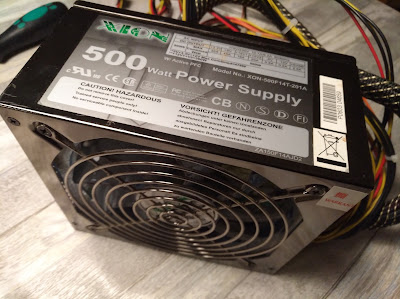 What if...
What if your PSU fails? That would depend on the design and quality of the unit. A cheap unit may blow up your complete PC, so perhaps it does make sense to invest in something of sufficient quality.
The second potential problem with a cheaper PSU is that its output may not be 'clean' and 'stable' enough, thus possibly resulting in an unstable home-server, with perhaps data loss.
And finally, cheaper PSU's may use cheaper components more subject to aging. So your PSU may be working fine at the beginning, but how well will it work after a few years? With ageing the quality and capacity of the PSU will go down.

Drive & PSU problems
The actual trigger to replace the PSU wasn't a power problem. I run Harddisk Sentinel on my home-server, and it reported issues with one of the harddrives, a 3 TB Seagate ST3000DM001 (which has a bad reputation if you search for it on the Internet). After replacing the harddrive I noticed that the fan of the power supply, even when in standby mode, was making noise (!)... And I realized perhaps it would be better to replace it. Which had been my intention anyway, two years earlier...

The right size
Lot's of stories on the Internet about proper size for a PSU so go and read them all 😏
My approach:
Bronze vs. Gold
If you buy a new PSU, consider the price difference between a 'bronze' and 'gold' unit. How long will it take before you earn that extra money back?
Let's say it's 2% more efficient, and your PSU runs every year 8 hours per day at 50 watts. You would save 365 days * 8 hours * 50 watts * 2% = 2.9 kWhr. Assuming 1 kWhr = 15 cents, then you'd save 45 cents.
Idle usage
Bronze, silver, gold, platinum etc. only perform well at HIGHER wattage, in other words it's best if your PSU isn't oversized.
Using a 500 W PSU, it would work optimal with usage above 20% x 500 W = 100 W.
There's no telling how good PSU's are BELOW the minimal usage as defined in 'bronze' or 'gold' standards, it all depends on the manufacturer and the model. As a rule of thumb: get a better brand, do not oversize too much, and read the reviews on the Internet.
I measured the idle consumption using a Kill-a-watt clone, and with the old PSU in it reported around 100 W when idle. At first glance that sounds right, but a single Pentium with 4 drives spinning idle should not consume that much power. I knew something was off...
Once I actually bought a 350W Seasonic G 360 PSU the issue became clear: with the new PSU the system would only use 35..40 W when idling. In other words, the Xion PSU wasted 60 W doing nothing. Ouch!
Maximal load and ageing
A PC is using more power during startup and shutdown, when all drives are spinning up and the computer isn't trying to be as power efficient as possible.
I measured the maximal usage during power up (with the Xion PSU still in use) as 160 Watts. Keeping all 4 drives and the CPU as busy as possible it wouldn't go above 165 Watts.
Assuming a supply ages 20% over its lifetime, the minimal size should be around 200 W.

The new PSU
Calculations and measurements indicated a 200 W supply should be enough, but a. there are very few quality supplies that small, and b. it's okay to have a little extra power to handle external USB drives and such.
I looked around and checked out the reviews, then settled for a Seasonic G 360 PSU. 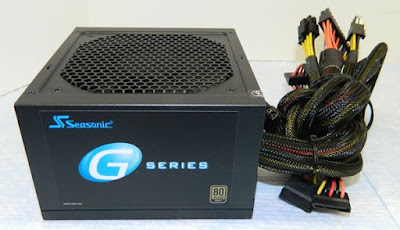 Saving
With the old PSU: Xion 500 W, 100 W idle, 165 W peak
With the new PSU: Seasonic G 360, 35..40 W idle, 110 W peak
As the PC is mostly (always?) idling, I'll be saving 60 W whenever it is running. I suspect it may still be wasting a few watts, but not too much. (I could move to a more efficient mainboard with, for example, an Intel Atom, but I want the system to be able to do some transcoding without getting on its knees...)
I expect the Seasonic to use 365 * 8 * 60 / 1000 = 175 kWhr per year, that's 175 x 0.15 = 26 euro / year. So, if I would only replace it to save power I would recover the cost after 2.5 years.
The new PSU is good / big enough to power a slightly better I3 with 6 drives, so I know if this board fails I can keep using this PSU, though I should probably not use it for gaming purposes, at least not with a fancy graphics card 😉
My biggest power consumer is still a Dell XPS720 with a 1 kW PSU. But as a rule of thumb I only replace equipment when it is either broken or unreliable, or no longer fulfills its purpose... 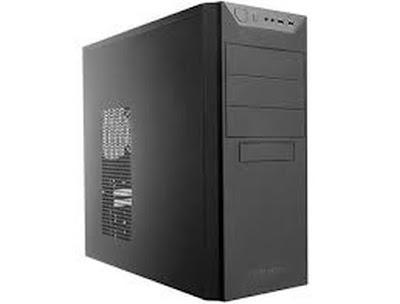 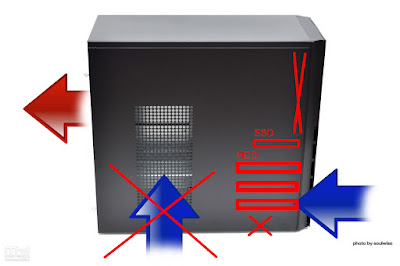 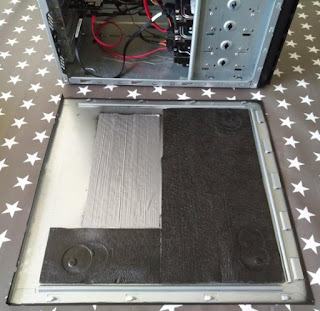 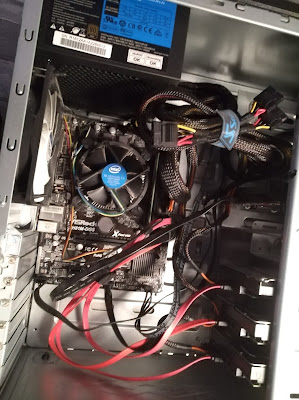 Update. It seems the latest Windows 10 update (June 2018) fixed sleep / standby issues, and keeps the SIL SATA card alive, even after a warm boot! It's Windows, so one never can tell, but still...
By NineLizards - April 27, 2017