DIY.
I still have some issues printing large objects on my (unheated) printer bed, but the final product is taking shape. We're slowly getting there...

One of my worries was the inflammability of PLA. It turns out fire retardant PLA actually exists... or existed, as it seems to be taken out of production.

I bought one roll on Amazon, and saw there were still some rolls available on Conrad (at a premium price, though). And... that seems to be it! No longer in production, no longer available.

Anyway, I bought one roll and hope that it will be enough...

Update: it was, but only just! Three bases, three lids, and one aborted print ate up the 500 grams roll. Just enough left for the clamps...

Approaching the final design... The lid still needs some ventilation holes, but everything appears to fit.

I just noticed Futlight (the manufacturer of the MiLight controllers) has changed some of its products, so the new controllers will not fit anymore. Fortunately I still have the older model, so that's fine.

I just might have the wrong type of controller... Just to be sure I ordered the older model RGBW and RGBWW controllers from a Dutch vendor... at a discount at that, so I'm fine. Mostly. I just might have to make one more minor modification to handle the different location of the connectors on the other controller variants. Nothing big, but it stops me from printing in the (expensive) FR PLA. I want to get things right the first time...

Early prototype test-fits (the large hole is to save time and material when printing):

Another test-fit after some more changes: 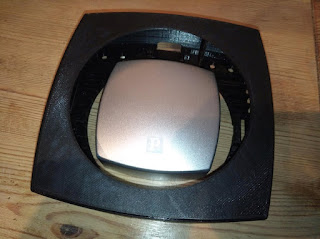