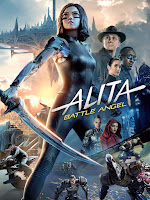 Great popcorn movie, and surprisingly true to its anime / manga roots. It didn’t do very well at the box office, so I fear we’ll never get the sequel it deserves, unfortunately… Still worth watching!

I never read any of the comics, but I did watch the anime way back when... I guess I need to re-check those.

One thing of note: it seems the movie sticked fairly close to the comics / anime, though it's of course more condensed (duh) and surprisingly 'clean'. The anime (I think originally called Gunm) is just a tad little bit more of a splatterfast...