Hmmm. Mrs. Peel. Was she ever married? To whom?

Oh yeah... Peter Peel. Thanks, Wikipedia. But who cares.

Anyway, I found a bunch of comics, and I think it is time to revisit the 60's. The comics are more recent, but I have the old shows somewhere on my server as well... perhaps it is time to get nostalgic and settle for some good ol' balck & white television.

When I was a child I seriously liked this show The Avengers. No, not the one featuring Captain America (though I like that one too). No, obviously nothing but the Emma Peel / John Steed show... But my parents didn't let me watch them. (Then again, I was young.)

Oh, that painful childhood memory... I'd better sue them before they get too old 😂

Note that there have been multiple incarnations of the show. They all featured John Steed, but his female counterpart varied over the years. I've watched a number of episodes of different eras and the ones with Diana Rigg are the best ones.

Back to the comics. They're okay, but not exceptional. The stories are as cheesy as the original television show, so at least they got that right. No Purdy or Tara here, it's Emma, and she is the one that counts. 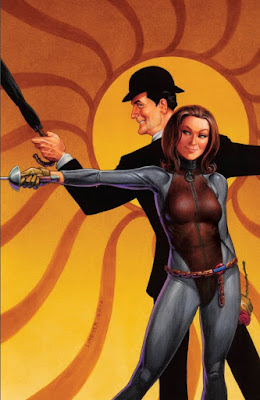 Yeah. If you like the old show the comics are fun. Not exceptional, but still okay.

Oh. And a special mentioning of VR5: that show has one very 'Avengers' like episode. I love that kind of pop (?) reference...