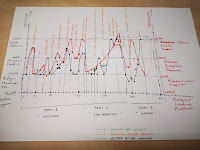 I have absolutely no idea if this post is going to be useful in any way 😊 but I was revising the novel I'm working on, and trying to decide if I should do a change or not... just before completion.

I shouldn't, because it took me long enough to get this far, but I'm in doubt...

So, as suggested by Mathieu (let's blame the guilty 😉) I made a 'Tension' chart, and added an 'Action' graph to it. 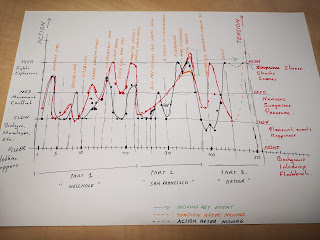 Now... does it mean anything?

What it does show is that I tend to build up the tension before the action takes place, and that in some sections tension and shocks happen without a corresponding / resulting action.

Slow in the middle

One could also conclude that the novel will be slow in the middle, around chapters 22 to 27, where both action and tension are a bit on the low side.

In my current setup there's a high peak around chapter 37, where the biggest shock and the most action take place (the 'For Gwen' chapter).

So, what would be the impact of restructuring some of the bits? What if I would move the key even of 'For Gwen' to the end? It is the scene with the highest impact, and I can actually--with some effort and rewrites, sigh--move it to the end.

Effectively it would lead to a few high octane chapters with action and shocks on which the book would end (followed by two slow burn 'wrap it ups' not shown in this chart).

It seems to make sense... Even though it causes me more work...

Things to do, things to change

So, I bulletized the events in the last 20 chapters, writing them down as they would take place after moving the key-event (green in the chart).

Then, with a bunch of colored pens and a stiff drink / large pot of tea / insane amount of coffee, I set down to add notes to those bullets, adding things I should change, things I should not forget, asking serious questions I should be asking, because readers ain't dumb!

And now... I have to incorporate those changes... Sigh. 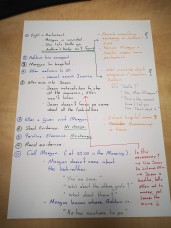 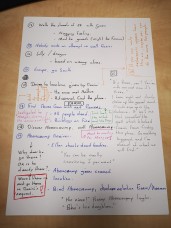 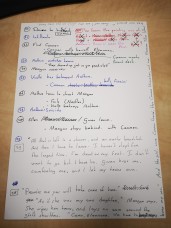 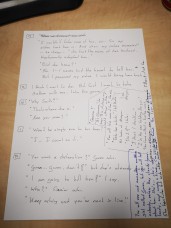