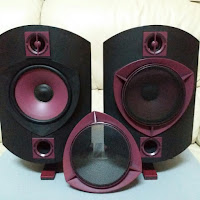 The Solid Monitor is a speaker manufactured early 90's, which makes them over 20 years old by now. They are (not that) small, solid monitor / bookshelf speakers, with decent high and mid and (for their size) quite acceptable bass.

These speakers are literally quite heavy, so you have to take some care when mounting these against the ceiling.

I decided to set up an Atmos / Auro3D amp at home, which meant I needed ceiling mounted speakers. The ceiling downstairs is partially concrete, partially gypsum, so I could not use 'in-wall' (in-ceiling) speakers. (More about my setup and Atmos here.)

I typically don't like overly small speakers (they often sound too thin) and had been considering some JVC woodcone units when I spotted a (four piece) set of second hand Solid Monitor speakers on Marktplaats (Dutch equivalent of eBay). A little investigation on the Internet later I decided to pick them up. These weren't new (hey, 20 years!) and weren't in top condition, but still...

I actually like the sound of these small speakers, tonally they seem to match my 'vintage' (expensive word for 'old') Magnat Lambda's quite well. As one of the speakers had a damaged mount I looked for a second batch and ended up with 8 Solid Monitor speakers, all mechanically sound, drivers in good condition, with two of the eight mounts damaged but that was about it. Not a bad deal I think.

I actually got a Harman Kardon CD player and amplifier thrown in as well. Which I quickly passed along to a relative.

The Solid Monitor is also known as Rock Solid Monitor. They were designed by (the people of) B&W, and made in China and Taiwan. Originally a separate brand it seems everyone considers them a 'real' B&W product nowadays. Here's a product sheet comparing the different models.

They are actually surprisingly good. Some of the old reviews (the ones I could still find online) were very positive. The batch that I have (all 8) sound pretty good after 20-odd years. The Taiwan build units seem to have a tad better dampening (well, at least more of it 😁)and better finishing, but nothing I could hear. (I only noticed this when opening them.)
There are some other models, and sometimes the naming gets confusing. Apparently, B&W couldn't make up their minds 😅 and opportunistic sellers further muddied the waters.
Update 05.01.2022. Added some more details on identifying the different models.
The following link and two searches bring up most models / variations:
Rock Solid Sound 'Monitor' / Solid 'Monitor' / 'Solid' / B&W 'Monitor' / B&W 'Solid monitor'
75 Hz ..20 kHz 90dB 150 W
I've seen all these names in use, even in official documentation. At first, the speakers in this series were sold under the a budget brand name 'Rock Solid Sound'. In the end, B&W adopted them as their own, grouping these as the 'Solid' series. See here.
Other speaker models are often mislabeled as Solid Monitors. They're not. And sometimes the real Solid Monitors are mislabeled as Solid S100, or Solid Monitor S100. Which is, again, wrong, as the S100 is a completely different beast (scroll down for the real S100). 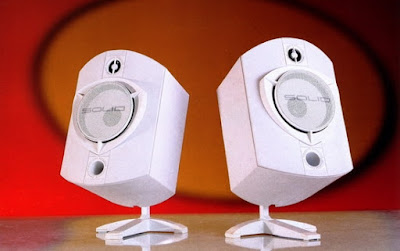 (Solid Monitor)
HCM1 (Solid Monitor variant)
70 Hz .. 75 kHz 150 W
The images and specs suggest these are simply a a variant of the original Solid Sound Monitor with a different looking front and 'hidden' bass reflex port. I'm not convinced two triangles will sound better than a single round hole, but these look a tad better with and without fronts, yes. They probably sound the same, or worse...
It also seems they've updated the stand, though I'm not sure that is an improvement either... The updated stand has an option to position the speakers closer to the wall, but that's about it. 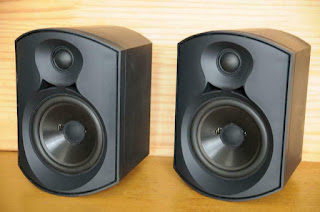 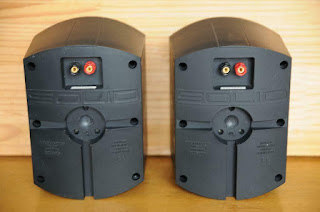 (HCM1)
Team (S75)
50 Hz .. 20 kHz 100W (?!?)
80 Hz .. 20 kHz 75 W (?)
Then there's the Team model. Some people call them 'Solid Monitor' speakers. Don't let this fool you, these are different (and not that solid, period). I couldn't find specs on the B&W site, but they look like a predecessor of the HCM2. I seriously doubt the specs listed on several sites (see also the HCM2). In fact, with the Team / HCM2s being around half the price of the Monitor / HCM1s it's rather unlikely they could come even close, and the pair of Team speakers that I own certainly isn't as good as the Solid Monitors. (There's a world of difference.)
I suspect the S75 name simply derives from the 75W spec. It doesn't appear to be an official name.
The Team / HCM2 isn't bad, but not as heavy duty as the Solids. If you run a smaller amp they might be a good choice, and they do not require a stand so are a better pick when used as a bookshelf speaker. They were often sold with a matching subwoofer (of doubtful quality).
You might want to add some dampening to improve their behavior, but if your amplifier can handle it I'd again suggest to go for the Monitors. They're not that hard to find, after all.

(HCM2)
S100
95 Hz .. 20 kHz 100 W (?)
There's another speaker, the S100, sometimes wrongly called the Solid Monitor S100, which is not the same thing. I've yet to run into any of these, but their triangular shape would suggest they are easier to place in corners... and damn, are they ugly.
Spec wise, these seem to be another variant on the Team / HCM2.

The Solid Monitor came in different colors and color combinations. I've seen black ones, white ones, there may have been gray ones. Inserts I've seen in black, white, pink and green. 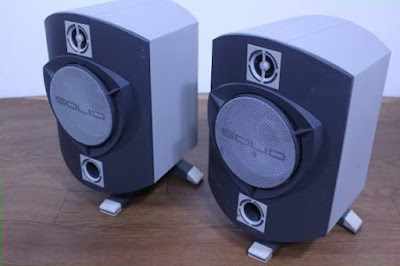 You might run into more colors on the Internet, but many are likely to be 'aftermarket paint jobs' 😄

The full white ones look best. Mine are all black. (Two have been white but a previous owner painted them black.) 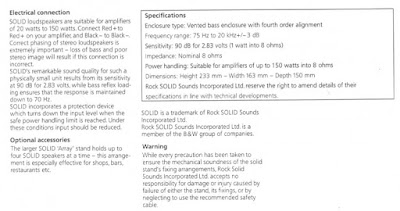 I guess the 75 Hz might be a bit of a stretch. Audyssey sets the cross over frequencies to 120 Hz, though I tried some bass test tones and without Audyssey I could definitely hear some bass below 100 Hz, not abyss deep but still enjoyable.

Then again, they are not that small 😏.

Mounting speakers on a ceiling can be a problem. In this case, I wanted to create a hybrid Atmos / Auro3D setup, and four (actually five, but I get back to that) are located in places where people walk or sit below them. So it's a good idea to mount them properly, and make sure they won't drop on somebody's head.

When examining the mount you can see a single nut keeping the whole 'T' shaped mount together. This nut might get loose over time. Also the aluminum 'knob' may break (two of the eight speakers I obtained had that part broken). 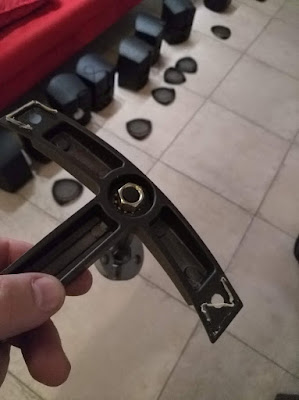 In the past some kind of safety cable could be bought as an option. I tried to obtain more information about this option but could never find anything, so I had to cook up my own solution.

Unable to find a small steel cable or other solution, I decided to use a special kind of 'nylon' cord (sorry, I don't know the exact name of the material). I needed some way to fix this to the speaker as well as to the ceiling.

The casing material is a thick, sturdy kind of plastic but it isn't thick enough to hold screws directly, so after opening up the speakers I glued small wood blocks inside. 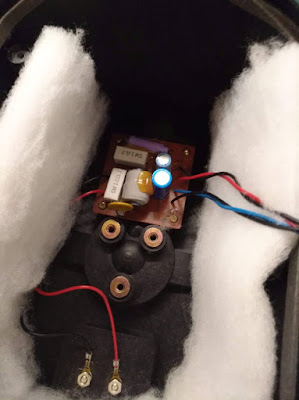 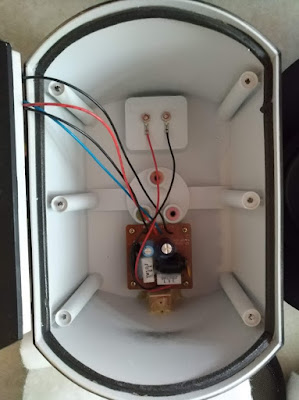 I then used a round head screw, driven from the outside into the wooden block on the inside, and attached the nylon cable, of course with some knots.

The cable loops over the horizontal part of the original ceiling / wall mount (there's a little space there right at the center of the 'T'). 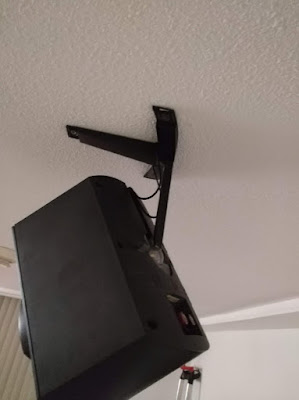 Now if, for whatever reason, the mount breaks or the nut gets loose, and subsequently the speaker would drop then it won't fall down all the way but will be stopped by the cable.

I did test though, just to make sure... 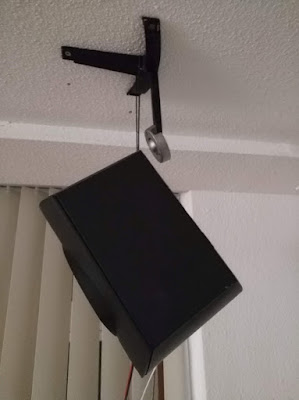 Well, with these speakers being nearly 20 years old I wouldn't have to worry too much about warranty 😁

Ad for the impact on sound quality: adding a cubic centimeter of wood is reducing the internal volume with a cubic centimeter. Well... That's a 0.02% change in volume thus bass reflex frequency. I think I can live with that. ..

I modified all eight speakers to have some spares. Here's my production line 😏 You also can see the different kinds of dampening, compare the 'Made in China' (6x) and 'Made in Taiwan (2x) versions. (You can also spot the ones that were originally white.) 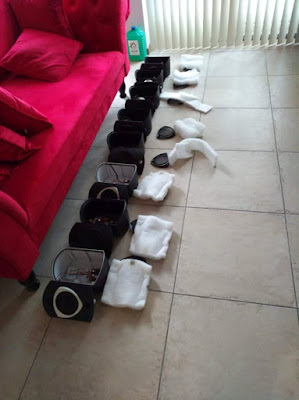 I mounted four thus far, but I plan to install number five directly above the listening position for the VOG 'Voice of God' channel in Auro3D. I guess I'll find little material to ever test it, and I'll need an additional amp to use it, but why not. Safety is even more mandatory in that position, I guess 😇

The fifth VOG speaker will require a different kind of mount as it is going to be mounted directly against the ceiling. Unfortunately my SR7011 in 7.4.1 has some amp channels left but doesn't allow me to route VOG to an amp, so I have to add one more box... sigh.

Completely unrelated, but I have never seen a speaker repainted as much as these monitors. Weird... though probably inspired by some factory color combinations. (I know there have been some different color combos but I could never find out which ones were official.) 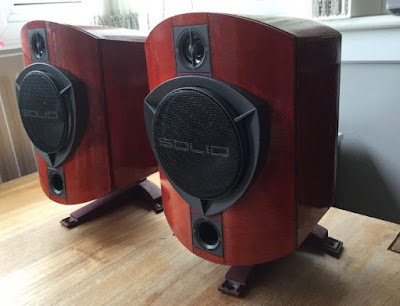 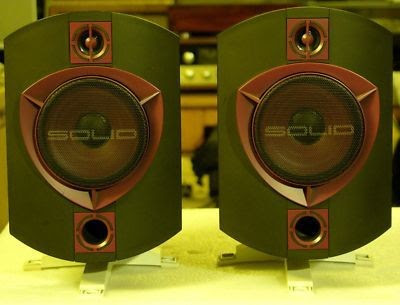 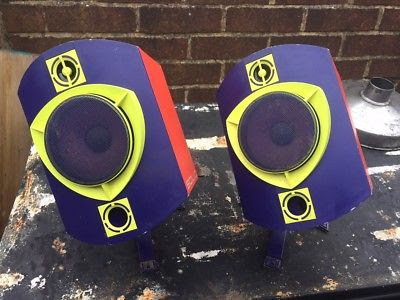