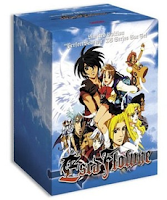 Ah, romance, romance, a little bit medieval mecha, and more romance... And those weird, weird noses (gotta' watch it to see what I mean).

It's a bit too sweet in spite of the overall story and the... Guymelefs? (Well, the local magical equivalent of mecha, anyway.)

It's not exactly my taste (most romantic anime, television and / or movies are not exactly my style, perhaps with Farscape as the one sole exception which I clearly only watch for the story, mind you).

But... it's not too bad, in some ways pretty good though, yeah, old.

But it has some nice touches. For example episode 12 contains a music box, and, of course, the melody it plays is the same as the intro tune.

(Don't ask me to mention the noses, okay?)

Now all that is left for me to do is find a Dutch copy of this boxed set...

There is supposed to be a Dutch version, but I haven't been able to find it. What I did find is a French / German version with Dutch subtitles, second hand. It will have to do. Once I've finished watching it (will take some time, as I'm sure I'll need a break now and again 😇) I'll post my opinion... 20 years later 😅