The Powers (that are no more)

Did you watch Powers, the show, on PlayStation?

Of course you did not. PlayStation. That's a game console, that's not a television channel like, euh, Netflix. Or Hulu. Or Fox. How right you are. But you should have.

... wasn't on NetFlix, but on VideoLand. Which was doubly weird, as it is a PlayStation Original, and supposed to be free for PlayStation Plus members. Perhaps in the US it was. It certainly coudln't be found on PS+ in the Netherlands. (Not that I would be able to watch due to DHCP errors but that was a whole different story.)

Sony gave away one moth free memberships of something called VideoLand (once the name of a video rental chain, again very weird as Sony was supposed to promote their own video channel).

Now VideoLand is a kind of Dutch NetFlix with lots of Dutch movies and series. The only reason I became a temporary free member was Powers.

Still, the show... Pretty good, actually. Surprisingly good. Though even I think the whole superheroes spiel is getting a little stale, this still is an interesting take. Imagine that supers (the collective name for those having superpowers) are primarily using their powers to, well, be superstars instead of superheroes. In some weird way that actually makes sense. Then put in a cop who's a former power who lost his powers, and you have a superhero slash cop show.

The FX aren't always to notch, and it took several episodes before it grabbed me, but the final episode of season 1 is a gem. Go and watch it, if you can find it anywhere (I checked and there is no torrent I could find...)

When you think about it, many of these shows use a similar concept... Alien / superhero / genius teams up with the local police force... It's about time some thinks up a new approach, though I admit it is the easiest way to have the main characters walk around carrying guns. Take your pick:

Feel free to add some more.

I fixed the DHCP problem, and on top of that Powers season 1 and 2 turned out to be available on PlayStation Plus, but they hid in a weird place: you had to download them from the list of 'downloaded' titles, even if you did not download them before...

Why did Sony not simply create a PS3 / PS4 application, similar to Netflix, making it easier for the consumer? Silly, this.

Season 2's on, and I still think this is a great show, with just the right kind of twist. And, quite important: no one is save, not even some of the key characters!

But I guess it’s fine as it is. Having a character being discussed by 'upper beings' inside a star is a little too corny, even for my taste. It would have been better if the main character would have woken up on a bench in the park, then find out his condo has been sold and no-one in Powers division remembers him. Yeah, that's a trope too, but it offers new angles.

One thing is good though, when it comes to killing of major characters Powers does not hold a punch. Who's the next one to die? I want season 3!

But alas, it was not to be.

Update. Powers got cancelled... It's sad to hear, but Sony pulled the plug on Powers, their attempt at 'original PlayStation content'. I can understand it failed, but I think it isn't the series that is to blame, but the way Sony brought it to the masses.

There were four essential problems that I see:

1. How to download and watch it. There was no dedicated 'PlayStation Video' app, bringing Powers and perhaps a few other (new or old) series to our PlayStation consoles. Just a simple PS3 / PS4 application would have fixed it.

2. Content. Powers started quite cheesy (hey, it is cheesy, and that is part of its charm) but got good enough over time. But it was only one series, and one series with one episode every week, simply wouldn't attract sufficient viewers.

3. Too much ‘PlayStation’, too little ‘Vue’… (Not sure if Sony’s Netflix alternative PlayStation Vue or whatever it is called will get much traction either…)

4. They did not consult me. (Well, perhaps there were just 3 essential problems then, to be honest 😁)


Update 4 (2021)
I can't seem to find the series anywhere on PS4, not even in the download list. Thx, Sony, for making these impossible to watch. Great way to force people to go for illegal downloads yet again...

So what will happen next? Probably nothing... Powers has died. Sadly. And nobody ever noticed.

Of course I can always hope that Sony and Netflix could come to an agreement, as I think Netflix would be more than able to add another season, then bring it as yet another binge-worthy show. It's not going to happen, but perhaps the series will show up again? On Netflix, Vue, or whatever other channel, of only for a re-run.

Ah. one can always dream, can't one?

So, if you're like me, and you don't like open endings, then should you watch Powers? Yes.

Although there are more stories to be told the show did wrap up its primary plot threads in the two seasons. In fact, the final (voices in the sun) scene isn't important or required, and the final episode would work fine without it. So yes, sufficient closure.

As an alternative, and if you can find them, you might want to have a look at the comics which inspired the show. I couldn't buy them online, nor could I download any good scans, so I guess I'll never know if these are any good... (Nobody wants my money?) 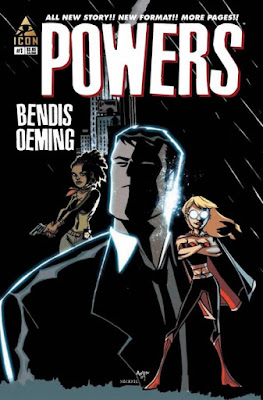 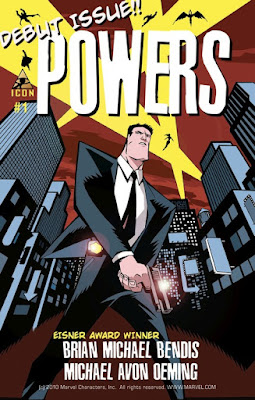