This series must be tailo- made for the 40+ crowd, as its situated in the 80's. I remember those bicycles! Promising, but I wonder how long it will last, as the target audience might be a bit too small...

Write it down: October 27, season 2 of Stranger Things!!!

Hah! Of course people liked this! How could I even doubt my fellow couch potatoes!

I hate to admit it but I am a binge watcher... So once this series grabbed me I could do nothing but keep on watching, wasting yet another couple of hours of sleep. (Can’t help it: I am an idiot.) Well, this is good. Go and watch it if you can stand old style Spielberg. I can.

Eight episodes was about the right length for this, you could think of it as a very long movie. I'm not entirely sure what is the right age to watch this, so carefully consider before watching it together with your kids.

Now the final episode of season 1 has me mightily confused... 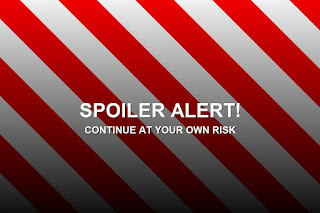 Let's talk about the final episode. It's clearly set up for yet another season. Here are the things I noticed...

1. Why did the agents leave the power station? They all left, leaving Hopper & Winona (cannot remember her screen name... oh wait! Joyce!) behind. Yes, they wanted Eleven, but there was a strange kind of remark made by Doctor Brenner... I actually was expecting them to blow up the power plant behind them, closing the gate, and closing the book on Hopper, Joyce and Will.

2. How did Hopper & co leave the alternate dimension? There's no explanation.

3. Are there MORE aliens? I saw an egg, yes, an Alien(s) egg! (Those that saw Blade must have been expecting either vampires, or re-used props... Google for it.)

4. Eleven said: 'I am the monster.' Could she actually BE the monster in some strange way? If you look at the final scene, she's not simply killing the monster, but she and the monster seem to wipe each other out using a similar method.

5. Ah, the bathroom scene. Coughing up... something... I was expecting this, and the Duff brothers were happy to oblige. So our world is now contaminated…

6. Alternate dimension... It could have been a dreamscape (and at a certain moment during the show I was convinced it was a projection of Eleven) but I'm not so sure anymore. It looks like it is an alternative dimension, that was recently (?) taken over by the monster and its relatives. Having the same castle Byers (probably spelled that wrong) in our and the alternative world means that if it is an alternative dimension, then it seems the moment of divergence must have been relatively recent. Which also means that growing stuff must be growing rather quickly... Well, it could still be a dreamscape, a different timeline, or something else, but I'll settle for alternate dimension right now, as underlined by the 'pen through paper' and 'rope walker' explanations.

7. What the... was Hopper doing? First getting into a car with strangers... then putting cookies in some lost part of the woods? (Hopper as a character might be the glue that kept the show together, actually.)

Another season of Stranger Things? Yes. Of course.

Netflix has found a way to attract the attention of its customers, and I find myself no longer minding the few euros per month to be able to watch the upcoming Daredevil 3 (not announced but I'm pretty sure it will come) in spite of the lukewarm (no pun intended) Luke Cage or The Defenders...

Most Netflix series appear to be successful, so it makes sense to add a few episodes left and right... They might be able to sell some series to some regular broadcasters (for a single run), adding a little more revenue, all the time increasing their brand exposure and building up a unique back catalogue. Well done, Netflix!

Now this show could go multiple directions... re-use the same settings, or visit another location / town, perhaps reusing some of the characters of season 1... Soo many possibilities! I want more! 80’s New York, anyone?

Let's hope Netflix does not fall into the trap of raising prices to improve their bottom line too quickly... oops. Already happened. Only time will tell if that will kill any momentum, or if it was a necessity to stay attractive as all that money is needed for creating their own content.