Seis Manos is nothing but glorious grindhouse anime. Let's go back to the 70's, and throw every exploitation / revenge movie cliche in the mix. Add unique character designs, some great animation and lots of blood and gore to the mix and enjoy the show.

I was getting a little disappointed by much of the recent anime on Netflix. Some of it was interesting but not outstanding. In fact, the better series were some of the older ones... Stuff from years go, like Black Company. Or more recent like Avatar: The Legend of Aang.

In fact, the style does remind me a bit of a contemporary version of Avatar. Well, Avatar didn't include the blood and gore and language, but the artwork was clean and attractive. This is too.

Colors are vibrant. Backgrounds painted, most of the time. There's no stark contrast between 'drawn' and 'computer generated' stuff. (It's probably all computer generated, but it 'appears' old fashioned.)

Fluid enough to be enjoyable, but yeah, it's a bit choppy in places. I need to rephrase that... The framerate is a bit low and seems to vary a little, but the generic motions are correct. I could live with it.

Characters stay in character. The violence is over the top, though the fighting itself seems to be based on real martial arts... with perhaps a dash of fantasy sause 😇

The story is fine, but it's mostly an excuse to do a lot of fighting and other excessive things. I must say the very first episode started kind of misleading. Little kid running away from a theft, seeking refuge with a secretive martial-arts master and his students.

And that's where the real surprises start: the kid doesn't make it. And still the story follows all the tropes of a good exploitation movie, with an overdose of Kung Fu tropes...

The rest of the series feature regular enemies like gut toting criminals, crime lords, corrupt padre's, some demon-like creatures, a witch, and so forth. The story isn't deep and it isn't trying to be. All the better. 8 episodes of each 30 minutes make sure things never get boring.

The end is a bit cheesy. But then again these kinds of shows must be cheesy. And it's all set up to be continued with a second season. Unfortunately, with a year of production time it will take us to the end of 2020 before we can see another season.

Characters are recognizable, different from each other, recognizable (which isn't always the case in other shows, unfortunately). Yep, they're cliche, tropes (fat bloke doing a drunken master kung-fu, the silent type who does some bad things, evil baddy who's an amalgam of every evil boss you've ever seen).

Without giving away too much, I can tell you that the new sifu looks a lot like the one from Tarantino's Kill Bill.

Well, yes, there's a sifu, but all the other characters appear to be Caucasian / Latino, and of course there's Luke Cage... euh, I mean Brister, who's black in body and mind.

The whole thing is set in Mexico, too, which is a change of venue, and in the seventies at that. Perhaps not unique for a grindhouse movie, but for an anime? With the fighting and blood it's all Tarantino's Kill Bill going anime.

In fact, the whole thing reminds me a lot of Kill Bill. Which I liked as well..

I'm so used to Japanese (I always watch anime subbed, never dubbed) that it is a bit of a surprise to find proper English voice acting in an anime. And most choices were well picked, though they might have considered a little younger voice for Isabela.

Mike Colter as Brister (yep, Luke Cage) has some of the best lines in the show, but I think in general all the voice work is great.

But... If you like Kill Bill and Avatar: The Legend of Aang, you don't suffer from prejudice, and you don't mind something which isn't even trying to be 'deep' then this is the thing for you. 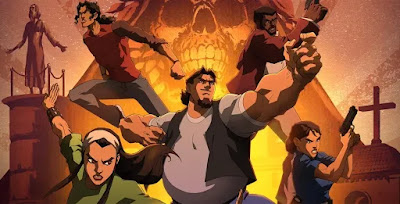 Non-japanese creating their own style of great (adult) anime? Mexican Kung-Fu? Wonders still do happen... Please, Netflix, please? I want more!
Update
Still no news on season 2, which is often a bad sign... 😟