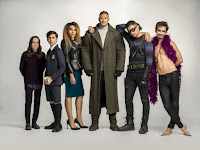 
I’m getting a little superhero- tired. The Umbrella Academy is, fortunately, quirky enough to stay enjoyable. All superheroes involved are adopted (?) gifted kids and part of a grand dysfunctional family.

This show is sometimes compared with Doom Patrol but it reminds me more of the undervalued Powers from the PlayStation network.

All three are great shows, though!

The second season of The Umbrella Academy should arrive soon on Netflix.

On October 1, 1989, 43 women around the world give birth simultaneously, despite none of them showing any sign of pregnancy until labor began. Seven of the children are adopted by eccentric billionaire Sir Reginald Hargreeves, and turned into a superhero team through what he calls "The Umbrella Academy".

Hargreeves gives the children numbers rather than names but they eventually are named by their nanny robot mother, Grace, as: Luther, Diego, Allison, Klaus, Number Five (his only name), Ben and Vanya.

While putting six of his children to work fighting crime, Reginald keeps Vanya apart from her siblings' activities, as she demonstrates no powers of her own.

And then... things happen 😂