Cary Caffrey - The Girls from Alcyone / The Machines of Bellatrix / Codename: Night Witch 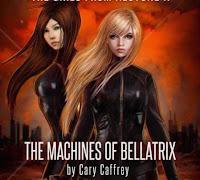 Cary Caffrey isn't a household name. Not surprising being an indie, self published author, and since 2011 a mere 3 books in his name. (Still that's 3 more than I did! 😇)


Looking for cheap and cheerful entertainment for my daily commute I searched Amazon for books that were a. cheap, b. Scifi, and c. had an audiobook complement. These three qualified.

Action adventure in space. Orphan (?) girl is turned into a superhuman fighter is turned into a mindless killer is freed again. And falls in love with another female student. LGBT all the way baby!

Actually, it isn't that bad. It's an entertaining read, somewhat superficial perhaps but the third book gets a bit darker. There's enough doubt and coming of age and teen angst to qualify as such, but I wouldn't call this completely YA.

Enjoyable. It's time he wrote some more.

His old blog
His new(er) page