This 'action adventure' trilogy features Jake McGraw, a lonesome trucker from earth that travels the star lanes. Sounds wacky, but there are real highways between the stars, and things on wheels move on them. Do not be fooled: this is real science fiction.

Jake must be a descendant of Jack Burton. He's stubborn to a fault, and manages to get himself into trouble, out of trouble, only to end up in bigger trouble. I think DeChancie had his Big Trouble in Little China tape on endless loop when he wrote this.

The Skyway trilogy is what put DeChancie on the map, I guess, though many people prefer the Castle Perilous series, which is humorous fantasy, whilst this is light action scifi.


At the time (that's twenty years ago!) it was easy to find the first and third book, but the middle part Red Limit Freeway was out of print and nowhere to be found. FUBS to the rescue!

Thanks to the legendary FUBS squad (Fido Used Book Squad, a group of committed book readers from the old Fido echo SF 0.28, and yes, you're forgiven if you do not know what that means) I got my grubby hands on a copy of Red Limit Freeway. I just cannot thank those FUBS members enough, as they were my only source to good English books completely unavailable here in the Netherlands.

And DeChancie actually rubbed shoulders with us mere mortals in that Fido echo. Oh, the days...


The roads between the stars

Most stories talk about the roads to the stars. In the Skyway trilogy these roads already exist. Eons ago some alien race build those roads. They lead from portal to portal, from one uninhabited world to the next. If you have something on wheels, you can travel them.

Nobody knows where the skyway leads, or who build it, or why they build it. There are no maps, except partial ones travelers managed to put together. And why does the skyway only visit uninhabited worlds, forcing any intelligent race to first develop space travel before they are able to leave their own star system? Why not simply put the portals (and the roads between) on the inhabited worlds?

Jake doesn't know, and he doesn't care. He makes his living on the skyway as a trucker. He's a regular Jack (no pun intended) and everyone is out to get him, because they think he holds the legendary map to the skyway.

It takes you three enjoyable books to find if he does 😉

These are DeChancie's best in my opinion. A word of warning is adequate: book number two was quickly out of print and is very hard to get. Expect a long 'quest' if you want to read the entire series on paper (though the paperback covers are way nicer than their digital counterparts).  It's immediately available on Amazon though. 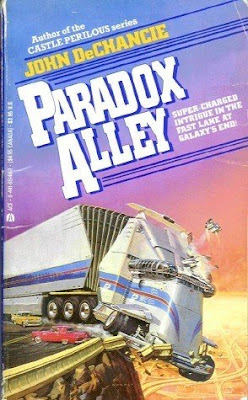 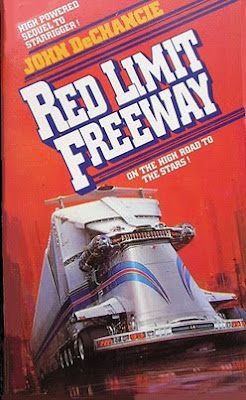 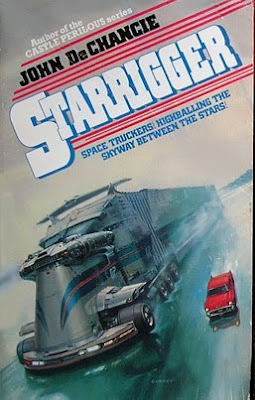