This is probably my last post this year, but who knows what can happen in the next seven hours 😁

So, let's work on the average self-publisher's depression... It's hard to get some hard numbers, so take the next bit with a bag or two of salt.

191 million ebooks sold in the US, 68% market share for Amazon, Amazon has 6 million titles, which ends up around 21 sales per title (ouch). That's US only.

Some self-publishing authors took 20 years to sell 500 books, so that's a similar number of 25 on average per year. So, no surprise there, I guess.

Two years ago the average sales per ebook title was 26 books per year. Not a surprise either when you realize that around one million people (tried to) self-publish last year, so obviously the number of sales per title is going down, because the majority of those new books are...

Well... Let's just say they could use some editing. Spell checking. Proof reading. Counseling. Tightening up. Revising. Rewriting. Some should be deleted. And there are some titles the authors should never have started working on. In fact, one or two are so bad, they must be responsible for the shortage in the electronic parts industry, to protect us from other 'writers' like that.

That bad, huh? Yeah, that bad.

Interestingly, according to Statista (though I found similar numbers elsewhere) 2012 was the best year for Amazon & Co when it comes to digital sales. Since then the numbers decreased a bit, until 2021, where they finally picked up. We haven't reached the 2012 peak yet though. 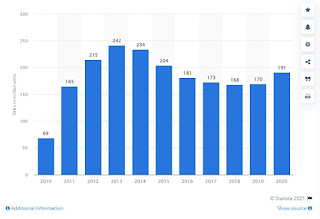 From personal observation the number of 'paper' sales is actually increasing with the younger generation, who have completely abandoned ebooks. Which means that the oldies have switched to more digital reads, whilst the youngsters simply have stopped reading except for an incidental purchase that looks good on the shelf.

What that means for the future? Will ebook sales suddenly tank? Who knows...

Another interesting statistic, and this one's a but subjective, because there are no hard numbers, but multiple sources (and you know how reliable the internet is, right?) say the majority of ebooks sell 90..99% in their first year.

That makes sense. If that new one million self-publishers buy one copy of their own book, then they won't buy it the next year, will they? 😅

There's one little point of light. Although sales typically follow a bell curve, with most sales into the first 'n' weeks, then tapering off to zero, independent authors tend to see a flatter, wider curve. So, if you are a proliferent writer, productive, with a constant output of new titles, then you will see some continuous sales from your back catalog (ie. the collection of works you already published).

Found another interesting statistic: the chance of selling 1 million books through classic publishing is about 25 times as high as through ebooks... though it's still very small, like in the 0.000625% or something like that. It's a better chance than winning the lottery, being struck by lightning and bitten by a shark at the same time, but still.

Maybe things aren't that bad? Maybe. Here's a more positive outlook: The Indie Author Sales Curve. Then again, that page hasn't been updated since 2015, so I guess he / she stopped writing since... Not a good sign!

Then again... Craig Anderson may not be updating that website, but he's still writing and publishing, according to GoodReads.

You'll have to make up your own mind, I guess 😉

Again, hard to find real numbers, but I found these, based on old pre-ebook numbers, and I do not expect todays market to be much different.

That's classic publishing, ebooks are on a bit 'flatter' bell curve, but the idea is the same.

The numbers above you can find with some trouble and deduction and a little guess work. But that's bland, faceless data.

Some small publishers released some of their numbers, and for 'barely above ground level' authors the number of sales is a paltry 250 pieces a book. Serious!

Final number... if you're selling LESS than 175 (e)books per title in the first week, you're considered unsuccessful (these are actual words by a smaller publisher, let's not mention who to protect the innocent.

It's more than welfare, but that's about it. I wouldn't give up your daily job anytime soon.

(Indie) Writers at different stages in their careers

I'm not convinced!
You still want to be a writer? Great! Don't hurt your readers and visit the essentials next...
By NineLizards - December 31, 2021