I guess I'm one of the last persons on this planet to watch Game of Thrones. The advantage, of course, is that you don't have to wait a week for the next episode... (Thanks to Netflix binge-watching has become the norm.)

So the last few days I took one or two episodes a day, finishing season 1. And as I found all episodes from season 1 to 6 I can take it easy. The final season 7... no wait, 8. The final season 8 of Game of Thrones will arrive April 2019. Which gives me a couple of months to pick up season 7, and to watch every single episode.

I find myself fast forwarding / micro-skipping sections of certain shows, but I haven't done that yet with Game of Thrones. That's interesting...

The very first episode almost put me off. Incest is part of the story, so is sex, rape, killing, beheading, magic. Oh. And tits. No dragons yet. Enough tits though. Though I'm pretty sure they will come 😎

I wonder if it attracts or deters viewers, having an incest scene smack in the viewers face in the very first episode.

Anyway, incest plays a major role. It's how the Targaryens kept their bloodline and sanity (somewhat) intact. Somewhat. Raeghar Targaryen was proof of that.

Did I mention the tits?

Except for the gratuitous amount of sex and tits (I did mention those, did I not?) Game of Thrones turned out fairly interesting. It's raw, it's a soap opera set in the middle ages, and there's a yet unspecified threat from the north of The Wall, but everyone's too busy doing the Westeros equivalent of a musical chair. Last person standing gets the iron throne.


Danerys Stormborn from the house of Targeryan

Completely nuts. Sold by her brother. Lost her son, and was forced to kill her master / owner / lover. She's blond and (often) naked so of course she's a fan favorite.

At least she appears to be fire resistant, and I predict she's going to put those dragon eggs in the fire...

Best episode thus far. I love how 'half man' Tyrion Lannister and 'camp follower' Shae hit of.  He's a very interesting character, that Tyrion. He's just born into the wrong family. I'm pretty sure this relation is not going to end well, otherwise it would go against the grain of the show. Let's schedule for a Romeo and Julia kind of end to that relationship. In three seasons or so. 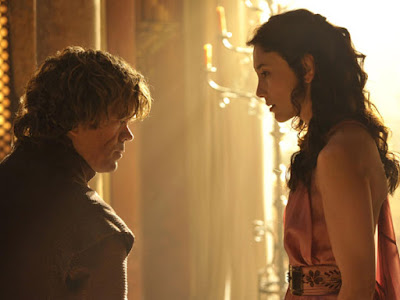 Next... Lord Stark didn't last more than one season. He lost his head. I actually expected him to show his spine and openly defy the new king, but he choose the life of his daughter(s). Unfortunately the new king still thought it a good idea to kill his eventual father in law. 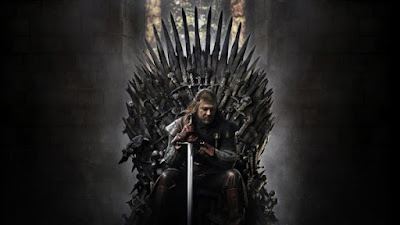 Amazing that the image of Ned Stark on the Iron Throne is what many people associate with Game of Thrones. Yet, he dies in the very first season. Sean Bean did a good job, for sure.

Another nice touch: kid walking through the catacombs, talking about how he saw Lord Stark arriving. In his dreams. Heh...

I wasn't expecting her to walk into the funeral pyre, but hey, she's fire resistent so it wouldn't matter. I think it would have made sense if her clothing would have caught fire, but the GFX department needed to save up for those dragons.

(Of course she walked out of the fire stark naked, but that didn't hurt the number of viewers 😏)

Burning the corpse and cooking the eggs did the trick. So now, 'here be dragons'. How long does it take for these three little creepers to turn into fire spewing flying monsters? Six to seven seasons, probably 😉

Now here's a thought... People knew these were (unviable) dragon eggs. After this little incident more people just might know about dragon eggs and how to birth dragons (just pitch them in a big camp fire and bring out the marshmallows, it seems). Some of the lines in the show would make it seem there must be more eggs laying around, because people knew what these were.

So, either the bloodline of the Targaryen is required, or there's space for a sequel... Well, as long as it features petite blondes doing a fire walk it will attract viewers.