I must have been talking about role-playing games, and especially the Amber Diceless RPG, in the past.

For years I planned to go and play again, but I just never got to it. But I'm old and if I don't start playing again, I probably never will…

Why this sudden realization?

Now and again I am asked to give a presentation in Germany. Not very surprising, as my Asian colleagues are not especially well known for their mastery over the English language, and perhaps it is better not to discuss their control over the German language.

Not that mine is that good… but at least it is a little better, if only a little.

The problem, obviously, is that my German is rusty as hell. I grew up close to the German border, and in the Netherlands we use subtitles instead of dubbing, so it's almost natural to pick up some German. Still, giving a presentation in another language is a challenge. So, just like my previous attempt 😉 I decided to work my way through some audio-books, German audio-books, obviously. Last time it was Harry Potter, this time I picked up Zelazny's Amber. It took some effort to work my way through the idiosyncrasies of Amazon.com, Amazon.nl and Amazon.de but finally I got what I wanted.

And as all roads lead to Amber 😊 there are just as many leading away... 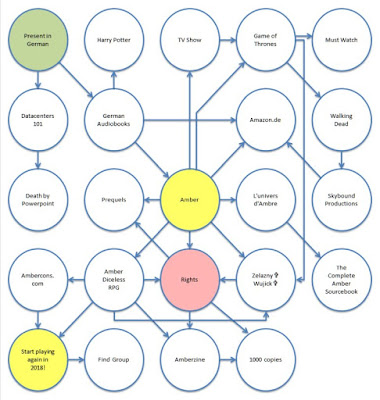 The Amber chronicles sold over 15 million copies, and have aged fairly well. It's not a popular series anymore though, and Zelazny, once a SciFi household name, seems to slowly fade away in obscurity.
Before his death Zelazny did write a number of short stories, and many (including me) are under the impression he was planning another book or set of books.

… were not written by Zelazny but by Betancourt, and they are, frankly, horrible. I tried the first two, and they just don't match the tone of the original 5-volume Corwin Chronicles, nor the 5-volume Merlin Chronicles.

Most readers must have reached the same conclusion, as Betancourt's fifth book was cancelled.

Part of the lack of spin-offs may have to do with the rights. Zelazny separated but did not formally divorce, so upon his death all rights defaulted to his wife, or so I understood. Zelazny himself is said to have stated he did not want any other author write books in his Amber universe. Which could be true. How should I know… Still, I think someone like Timothy Zahn could have done a much better job than Betancourt.

Who holds the rights on the Diceless RPG is just as complicated. The late Eric Wujck started his own company, Phage Press, just for publishing the Amber DRPG. One expansion Shadow Knight was published. The second expansion Rebma might actually have been ready to print but was never released. Then Guardians of Order bought the rights of the DRPG, and they sold it to Diceless by Design.

You can still buy the DRPG online, so apparently, the rights on the one incarnation of the Amber DRPG still allows them to sell it as is, but it seems does not allow them to sell any future expansions.

During his life Wujck released a few 'magazines' (fanbooks?) called Amberzine but he was limited to 1000 copies each. (Again, rights…) 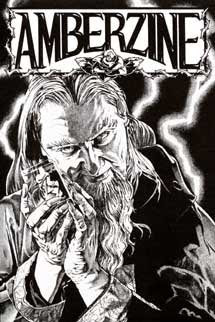 Of course I have been unable to obtain any through formal channels (prices have gone through the roof) but I found a few copies online, though not all of them.

So, now there are rumors of a TV show based upon the Amber chronicles. This could be pretty good or horribly bad,

Skybound Entertainment, the company behind The Walking Dead, announced that they are working on an adaptation for television. It could be successful. Once Game of Thrones is done perhaps there is just room for another brother / sister / family infighting drama in a mythical setting. It could be great.

It could be a complete disaster.

So, besides watching Game of Thrones (which I still have not done) I have another new year resolution: I am going to play Amber again. Even if I would have to sell my soul, go abroad, have sex with a demon, and visit an AmberCon to do so. Not necessarily in that order.