Ads add up, so do the right thing

There you have it. I'm biased, so this isn't going to be a fully objective review. But it actually isn't about search engines, to be honest. It's about 'free' services that cost nothing.

There's absolutely nothing like Google. Google is not just a search engine, it now has become a full eco system which I cannot escape from. I am, for all practical purposes, completely googlefied.

See for yourself... Stuff I use a lot:

Stuff I use now and again:


I just love my Android phone...

All the above comes for the price of nil. Zero. Well... not entirely zero, as Google pretty much knows everything about me now. But money wise it did not cost me anything.

(Apple lovers will have a similar preferred taste, I guess.)

I liked Google's old motto. Evil is, well, bad, and something one shouldn't be. Of course, the definition of evil is up for discussion.

Google's new parent company Alphabet has a new and different motto, which is a little more worrying: do the right thing. The right thing for... who? The users? The governments? The shareholders? The advertisers? They don't tell.

Do the right thing... are you listening, Microsoft?

I am in a love / hate relation with Microsoft. I do like Windows, I'm not afraid to admit it. Yeah, it's a bit wonky now and again, but I do not have to jump through a thousand hoops to get something installed. Also, most software has been written for Windows so not everything is available for Linux or Mac.

But Microsoft has managed to p*ss me off time and time again. I don't mind paying for an OS license, but some of that pricing is ridiculous. Then Microsoft managed to completely alienate me with Windows 8, 8.1, and 10. What a mess. And though Windows 10 was somewhat redeeming Microsoft went all the way by enforcing stupid stuff on me, and I expect it to become a complete add driven monstrosity.

The perfect example of Microsoft's ideology is their search engine Bing. Which isn't too bad, actually. It's just sporting just a few too many adds. Just a few...

I needed to install an anti virus package, and (of course) it had to be a free one. For several reasons I picked Avira, then googled for Avira Free Antivirus. And this is what came up (click to enlarge): 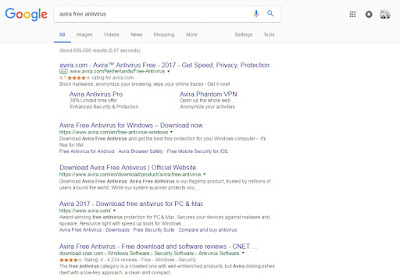 At the top you find a few adds, all in one block. A pity there's no longer a different color background, as there was in the past. There's only a little marker 'ad' and that's about it.

Of course, there's no telling how any of the 'organic' search results have been influenced by advertising and other money streams, but lets assume there's no evildoing behind those results. 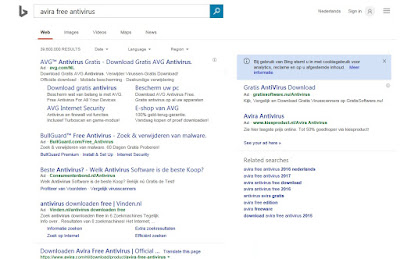 Everything, everything on the screen is an add... I actually have to scroll down to even see the first organic result.

Thanks, Microsoft. No matter how good your search engine, you managed to alienate me again. Good job.

Dear Microsoft, I would happily pay for your OS if you would not force me to use Metro, force me to succumb to your 'arbitrary' driver updates (even if your PC is perfectly working), 'arbitrary' system requirements (old PC's are not allowed to run Windows 10), 'arbitrary' removal of my user rights (it is absolutely none of your business what I put on my PC).

Dear Microsoft, if you want to become a service driven company instead of a product driven company, then how about respecting your users for a change?

No! Free is great! But we have to be aware of the risks of free, and that free isn't always 'free'...

Free services and products can only exist if they are...


Because whenever there are costs involved someone has to cover those...

Which brings me to the biggest threat our (free) information world is facing. Wikipedia.

Is free. And has pretty much killed any commercial encyclopedia. Understandable, as a good encyclopedia costs money, and is slow compared with the typical google search (hey, hello Google, nice to meet you again)...

But how reliable is an encyclopedia that can be changed by anyone and everyone? If parties orchestrate a coordinated attempt to rewrite Wikipedia, they just might succeed. Politicians, criminals, corporates, governments, they all might have their reasons to change or suppress data.

Okay. Now how about a commercial online encyclopedia? Companies like the Dutch 'Winkler Prins' have their encyclopedias converted to web pages, and you can buy a subscription.

Which truth is more true? I have no clue.

Now, would a commercial entity be able to compete with Wikipedia? Perhaps. They would need lots of cheap hosting, and advertising income. In fact, a company like Winkler Prins might consider opening up their database in exchange for advertising income, though I'm not sure that income would cover the costs of hosting... Anyway, they choose a paywall, yet forgot to even mention the price on their website...

I would be tempted to suggest they were bought by Microsoft. Perhaps I should add that to that specific Wikipedia page and turn that into (yet another kind of) truth.

It's just like Fox told Scully: the truth is out there. And just like in the show, it's just bloody hard to find.