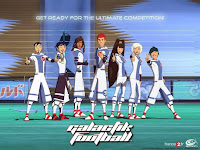 Review.
I'm not into soccer much, but the anime series Galactic Football wasn't too bad. Though it wasn't too good either, to be honest 😅 Most interesting was perhaps the drawing style, CGI 'cell shaded' characters on more detailed backgrounds.
Synopsis
Interplanetary kids play football, have some fal-outs, get super powers and save planets. Well, perhaps a little better than that, but that's the gist of it.