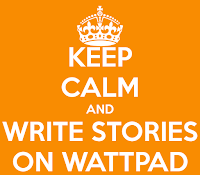 Writing.
Probably the two most difficult to answer questions ever: what makes people laugh when reading, and how to attract readers on Wattpad?
Humor