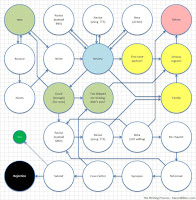 Writing is hard. It's very hard. People have no clue how hard it actually is. Even writers themselves are clueless.

So, I set out to document the writing process. Read on (besides, it was about time I created another mindmap)...

(Some people think the process shown here is the real thing. It's based on the real thing, but more of a funny take. Still, the lessons learned apply to everyone. So read on...)

On a more serious note: yes. Make sure you do revise your story. It's very rare to get it right the very first time.

Me? I certainly did and do not get things right the first time! (And I do revise until my fingers bleed.)

Please take these words with a pinch of salt, even if there's a bit of truth in them...

From idea to rejection success

First of all, let's assume you know how to write, what capitals are for, and how punctuation works. Again I'm not the expert myself, but this link might be of some use.

First thing to do is bounce it off someone else. Perhaps it's a stupid idea. Perhaps it's the best ever. Perhaps the other person identifies that one flaw you overlooked. (Like, for example, that you can't write, even if your life depended on it. These things happen, you know.)

Ideas that don't make it (yet) can still be interesting, so always keep them.

Let's study the chart and see where that takes us... (click to enlarge) 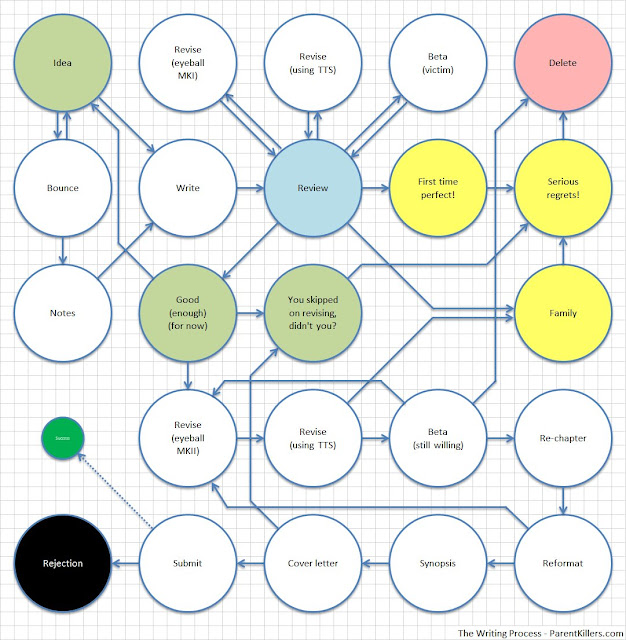 Next stage, write. Combine your latest, best idea with your notes, and write, write, write. Slave away, burn that midnight oil. Until you have written your masterpiece.

Then put it on the shelf, take a stiff drink, and face your boss to explain why you were late this morning...

Honesty is such an easy word

... but oh dear, it's a hard thing to do. So you wrote that great chapter, and now, three days later, you re-read it. It's bad, isn't it? If it isn't, and you wrote something perfect the first time, you're the new Stephen King / Leo Tolstoy / Brandon Sanderson / Roger Zelazny / < insert your favorite author here >.

You know what? You're better than all of them together, because you don't have to revise. Fantastic! Follow the arrows. We'll see you next week with your next idea.

Everybody else, pay attention.

Did you know that the old telephony switches sometimes had FOUR status lights? Green, we're all fine, Yellow for 'we're having some trouble'. And red for 'Holy shit, we're out of toilet paper'. Many of those big switchboards had a fourth status light, in blue. When it turned on, it was time for the local operators to look for another job.

The good news? We'll revise at least one more time before we're done! Great! I'm so looking forward to that...

I don't have to mention that you might want to consider using Grammarly or another spelling checker as part of the writing and revising process, do I? No? Thought so.

This is a trick I use myself. Instead of reading my own text, I have a machine (my computer) read the text to me. I typically sit back, relax, and read my writing in parallel with the spoken text. This forces you to reconsider what you wrote, at a slow deliberate pace. It also helps to identify repeated words, excessive use of 'I', and it makes sure your mind doesn't skip any scenes 'it already knows'.

(If you have Word 2019 it has a reader built-in. I'll add another post in the future on using a tool such as Balabolka, which works with Google Docs and LibreOffice.)

For me, being a non-native speaker, I absolutely need this stage.

As an alternative, there's nothing wrong with reading out loud your own writing. You'll look stupid, but hey, you're a writer, you're supposed to be somewhat excentric!

Ooops. I meant eccentric, though in my case both words apply 😁

Or to a family feud. That depends on how bad your story actually was.

Once your work has passed the muster, and you've written enough, and you haven't skipped any revising... You did' didn't you? You'll have serious regrets... We'll see you next week.

In earlier versions of the flow I assumed you would write a whole book at once, but I realize now that is a bit unrealistic, so I added an option to return to the 'idea' stage. For your next chapter.

Anyway, you've written all your stages / chapters / parts, and now you're getting ready to get published. So, you print out your manuscript and...

You first re-read the whole thing. Again, I use a TTS tool to assist me, and then if I still have a Beta reader available (most will have given up by now) then I'll ask that poor soul for additional feedback.

Then comes the technical, boring part.

If you don't care about chapter size, you might want to have a look at it now. The optimal chapter size is driven by your audience and publication platform.

Sometimes I wonder if the readers become less literate every generation. In a few years, people can no longer read a book without a touch screen and two speakers.

If you plan to submit your story, make sure the text is properly formatted. Each publisher has their own requirements (which can be quite annoying if you plan to mass-mail your submittal).

You may find that the process of re-chaptering and reformatting requires some revising...

(Most of us have two eyes. Use the other eyeball if the first one got tired of all those revisions.)

Almost there. Carefully pay attention to what the publisher expect, and strictly adhere to that.

Ready? Ready? Everything packed into that envelope, and you're ready to send it out?

You skipped on revising, didn't you? You did. Well, you'll have some serious regrets, because sending your work out in its current state will never land you that desired lucrative contract. Put your work in the shredder, and we'll see you in the same class in a year.

Ah, look at that little green circle, with those tiny cute letters that spell 'Success'. It's still too large, but otherwise the letters were unreadable.

Every five minutes a book is released on Amazon. Every day publishers receive thousands of applications by enthusiastic wannabe writers. Lot's of that is outright crap.

Your work isn't crap because YOU took the time to edit it.

That's why you shouldn't give up. Print out the graph and add one more dotted line, from 'rejection' to 'idea', and start writing that second novel that will make you famous. You can always sell your first novel later, once you've made it.

Although this started as a joke (although I'm pretty serious about stories getting bad when not edited!) it made me think about all the stages I go though when writing a story. I made a smaller, more serious post regarding the 'edit loop', you'll find that one here.