Can a single episode redeem a show? Yes. It can.

Travelers was discontinued on regular television, but it survived on Netflix, and a third (and probably final) season was added.

That's typical Netflix. Take an existing but discontinued series, probably get the rights cheap, then add one or two more seasons so you have another exclusive on your channel. Netflix bought the first two seasons for less than it did cost to make those (probably), and everyone who watched the first two seasons has to go to Netflix to watch the third. On top of that, Netflix might just be able to sell third season to other stations, who can tell.

Still, there's something very non-Netflix about Travelers. Travelers is your typical episodic 'how do we save the world this week' series. You know what to expect when tuning in. Limited overall arcs. Some progression without too many major characters getting killed. Resets at the end of an episode. Recurring villains. Old friends. Expanding cast. Limited budget.

(Just think of Supernatural and you know what I mean.)

Still it works for Travelers. And Netflix kept that same format for the third season. Except for a kind of deliberately sense of doom, an unavoidable destiny, an undertone of despair.

Mostly more of the same... until the end. And that is where things changed.

Travelers was fine, but after watching season two I wondered how they could ever recover.

In a way, they didn't. The impact of the worldwide announcement was just downplayed. I wonder if the public would actually take it that easily (or would believe the existence of 'travelers' to start with). All I could do was switch on my suspension of disbelief, and watch the show muddle on until it would reach it's 4400'ish petering-out ending.

Or so I thought. One episode (the final episode) changed it all... And for the shippers (it's a bit of a spoiler, but I think in this case it's okay): 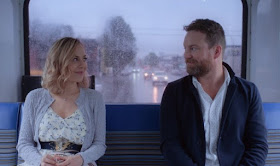 Those two deserved that ending, now didn't they?

A proper closure is essential for a good show. Or so I believe firmly.

Thank you, Netflix, for giving us a third season, without some horrible cliffhanger. And thank you producers and show-runners and actors, for those last two episodes which turned something average into something special.

Yeah. I enjoyed this. 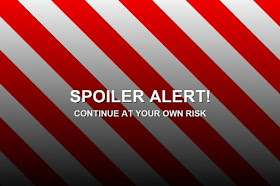 Kill your loved ones

Be honest. You were rooting for Marcy and David, but it had to be a Romeo and Juliet ending. David saves the world but dies from radiation, and Marcy blowing out her own brains to make sure 0001 doesn't access the Director's backdoor.

And then the travelers team send one of theirs back in time... further back in time, into our past (not the future's past). Which saves the world. Well, mostly. As the final image shows, perhaps not...

It was all very predictable. As soon as I saw the matrix-alike symbols scrolling, I just knew what the next screen would show: 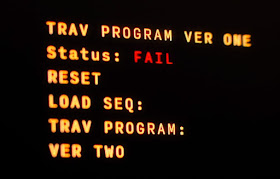 But then I got the shivers. You see, the show assumes this was the first attempt. Or so the characters tell us, but... Let's make it a little scarier with a little photo-shopping (that's a verb these days, I guess): 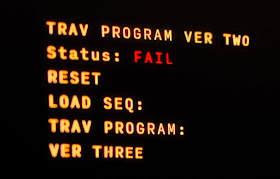 Now that would hurt! Especially because the Director knows how to go further back in time (assuming it wasn't all a lie)... 1. Set up an outpost in history, 2. Build a new set of machinery there. 3. Copy yourself to the past. 4. Use this new base to access the same or even earlier time frame.

A plate of spaghetti is nothing compared to this...

Anyway, we'll probably never get the answers we'd like. In season 3 there were some new elements introduced, and some other concepts fleshed out just a little more, which all raise more questions...


We will never find out. I guess.