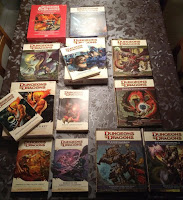 I have a reasonable 😅 collection of RPG stuff, much of it never used, and lots of it completely useless. I wonder why I even bought some of that stuff...

I was considering comparing the 'starter sets' but decided to first have another (final) look at 4e. Fourth Edition. That one edition which didn't work out so well...

Let's start with one of the best DMGs ever, 4e's Dungeon Master Guide. If you ignore the rules it is a great resource, and certainly worth reading, even for 5e DM's. The same goes for the 2e PHB and DMG, both show some interesting tidbits which are missing in the 5e DMG.

To be honest, I never considered the 4e DMG. I bought the 4e PHB, DMG and MM at the same time, but after working my way through the 4e PHB this just wasn't my thing. When someone brought up the 4e DMG as one of the best D&D books ever I decided to have another look at it, and shockingly it actually is pretty good. Quite a bit of the advice would work for DM's of any other game / edition as well. So yes. There's some redeeming quality in 4e after all 😏

The 'points of light' concept is good. A corner of a dark world, overrun by monsters, where small towns and local heroes are all that's left. It's feels a bit like Midnight, a Fantasy Flight Games d20 campaign setting.

I didn't like 4e. Much. At all. It all seemed so focused on miniatures, and completely skipped the 'theater of the mind' which was part of 2e and 3e.

4e just didn't feel right. The books seem well written and clear and easy to use (except for the Essentials stuff) but they lack emotion, compassion, flavor.

I'm not a marketeer. But when 4e was released in 2008 it didn't take of, and part of the player base moved over to Pathfinder (continuing the 3e / 3e5 flavor). In 2010 WOTC released Dungeons & Dragons Essentials, which was 4e repackaged in different boxes and books.

The Monster Manual was replaced with a Monster Vault box and book, including punch-out tokens for many of the monsters.

So, effectively, as a DM you ended up carrying around 5 softcovers with overlapping information and poor organisation. Essentially a disaster. Information was everywhere, and nowhere. 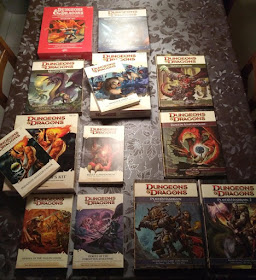 Some products couldn't even make up their mind. Take Monster Vault - Threats to the Nentir Vale...

Style / layout matching the 4e core books and Monster Manual, but book and contents state it is part of the Essentials line. Again it doesn't matter much as both 4e and 4e Essentials are the same thing, but still.

The 4e and 4e Essentials starter sets are different. At least that's good. Different maps, different books, different adventure. Same set of dice, and same monster tokens, but that's fine. Content wise both are sort of 'okayish' but hey, it's 4e after all...

One redeeming factor is the exterior of the second Essentials Starter Set... the (exterior of the) red box is bringing back memories. But if that's enough reason to buy it? Hmmm. 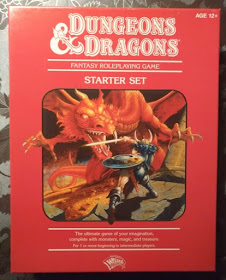 I will revisit all the starter sets I own / owned / borrowed, and show the contents. Some other time...

Find yourself a second hand 4e hardcover DMG and ignore the rest of 4e.

If you like tokens you could consider grabbing a cheap Monster Vault. If you like some pre-build opposing parties and you're willing to do the work converting those to 5e you might consider Threats to the Nentir Vale.

But still, all in all, the whole of 4e was a bit of a disappointment (except for the 4e DMG, I have to admit).