I've been struggling with Wifi reception in my house in the past. We all have been there I guess 😀

I have been using different routers over time. At the moment I'm using the Archer C7 which goes for 80 bucks or so.

I'm using a C7 V2 since end 2015, and a newer C7 V4 since mid 2017. These things are in daily use, and with kids they are never allowed to fail 😅 As far as I can tell both units never needed a reset, but (due to power outages and some refurbishing of the house in which we live) they have had their share of unintentional reboots over time. Long time stability is relative I guess 😊

Keep in mind that brand and model of router matters little if you use the wrong channel or simply expect too much from your neighbors...


What do you get


What you should not get

A C7 v1! That's an older version with older hardware, with very limited 5 Ghz support. Steer clear of this one. Also, those who want to run OpenWRT may want to check what builds are available for each hardware version. The latest C7's may no longer be able to run non-TPlink firmware.

(I run stock firmware, I haven't tried OpenWRT on the C7 as I simply didn't need it. I did use OpenWRT on an older DLink router so have had some experience with it.)

Simple shiny black box with blinking leds. Nothing special. It can be wall mounted. Here's my C7 v4 downstairs: 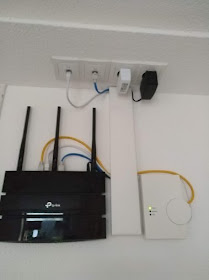 I actually have another C7 (an older v2) in the attic (I live in a 4 floor house, which sounds more grand than it actually is) to have coverage throughout the whole house. I played a bit with its position, and mounting it almost directly above the ground floor C7, in the center of the house, gave the best results.

3 external ones (5 Ghz), 3 internal ones (2.4 Ghz). Some sites claim newer models have combined antennas, but I took my C7 v4 apart and mine still has separate antennas for 2.4 Ghz fixed on the mainboard, as far as I can tell. However I've seen tear-downs on the Internet witch different innards.

Changing the orientation of the antennas made almost no difference in reception quality, so I just kept them straight op.

Both C7's work fine in my home, but don't expect a stellar reach. Reception is decent in the back garden (7 meters outdoors, 1 brick wall, 5 meters indoors). Reception in the front garden (less than 5 meters, passing through 2 gypsum and 1 brick wall) is very poor.

I have wired up most of my kit so my Wifi usage is mostly limited to mobile devices in day to day use. Using one or more laptops when working from home poses no problem, VOIP, VPN, online video conferencing and so forth all work fine.
However I tried NetFlix on a Philips 65" OLED using Wifi, and played some games on PS3 and PS4 using Wifi, one concrete floor up, without any problems.

The C7 is not an automatic 'mesh' router.

In general, SSID name sharing (giving each network ie. both C7's the same name) can cause some issues with home equipment. If it works fine with your kit: great. If it doesn't, just name each net differently. So now I have four networks in my house... Home1, Home2, Home3 and Home4... Less convenient, but it works.

I've tested the USB port to connect a printer and an external hard drive without any problems. Ports seem to be limited to USB2, and don't expect anything too advanced. Good option if you're in a pinch, but again: I prefer wired ethernet everywhere, and so should you.

Lots of sites complain about stability, but both my C7 v2 and C7 v4 have been running without any problems thus far. No reboots required, and I haven't suffered from unexplained performance drops that required a reboot. (Not like the old TPlink WL-TR841N, that thing was horrible!)

Firmware is still updated for older and newer models. No serious or model specific vulnerabilities known. The C7 v4 was suffering from a vulnerability that was fixed in the latest firmware.

All these units look (almost) identical from the front, but differ on the rear. Model number and version are mostly important to those who want to flash OpenWRT. The manufacturer's firmware seems to do a reasonable good job.

So far I've identified the following:

Cheaper version of the C7. Haven't used one, but appears to be very similar to the C1200.

Some vendors list this unit as the TPlink AC1200.

Newer, cheaper, slightly lower performance than the C7. There seem to be two different front LED layouts and rear layouts.

Some users claim a software upgrade turned it into a C7. The mainboard inside looks a lot like the C7 v4 but isn't the same. It could be identical to a C7 v5, but I haven't opened one of these yet, and probably never will 😄.

I did actually try one at a friends' place. I couldn't fault the performance so you may consider getting one of these if you have to go cheap...

Skip this one. The 5 Ghz is poor and buggy.

Some vendors listed this unit as the TPlink AC1750, but the official name is Archer C7.

My older unit. Used it a long time as a Wifi access point behind a Ziggo TC7210 modem. I now moved it to the attic to improve reception on the higher floors, and used a newer C7 v4 on the ground floor as I want to experiment with its VPN functionality.

The C7 v2 has a dedicated Wifi switch, and two USB ports.

The user interface is a bit old fashioned compared to later versions. There also doesn't seem to be local VPN server support.

A newer version. It dropped an USB port, and combined Wifi and WPN functionality in a single button. Guest mode seems to be implemented a little better, and it does support a local VPN server. (Which I haven't tried yet, still on my to do list...)

There appear to be C7 v4 units with internal antennas, but also units with external antennas and a different mainboard. Haven't got a clue how to identify them, but it doesn't seem to matter much performance wise, so who cares 😏

This unit has different hardware and newer firmware. OpenWRT may no longer work on these and newer C7 units.

A C7 sold by Amazon, with some extensions for Alexa and Amazon services. Hardware similar to C7 v4 or v5. Haven't encountered one in the wild yet. Not even sure they are sold here in the Netherlands.

A Chinese version of the C7 v2 with 6 external antennas and a different mainboard. Some users have soldered in a new flash memory chip and are running it C7 v2 firmware on it.

Newer. Better. More expensive. Stronger CPU means slightly better performance, though to be honest: I tried a borrowed C8 for a while, and didn't see any obvious difference between the C8 and C7 v4. In fact, the C7 gave a slightly better Wifi signal on both 2.4 and 5 Ghz, so your mileage may vary.

It's not as good as, for example, a Fritzbox. But it's cheap and does the job.

The thing simply works. I've not run into any issues. Firmware is still up to date and no major vulnerabilities known. Yes, there are better units, but at this price level I know of none.

Caveat: there seem to be many different versions of the C7 out there, so some people might have had some (bad) luck... Make sure that you install recent firmware, just to be sure.