I'm impressed (and a little disappointed but that might be because I was expecting something else, not because the story was bad). I also would like to mention that I am one of the few people who actually liked the movie?

Yes. Finished the three audio books of the trilogy His dark materials. Pfew. (It wasn't that much of a punishment, when you're stuck in traffic jams audio-books are a great way to pass the time. I tried learning another language but that didn't work.)

Good read and an okay movie. I admit I first saw the movie and then read the book, and perhaps that makes a lot of difference, but I think the movie deserved more credit then it got.

Little warning though: not suitable for religious nuts, and lots, lots, lots of pages... 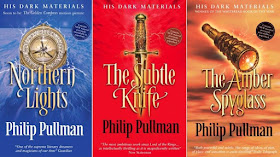 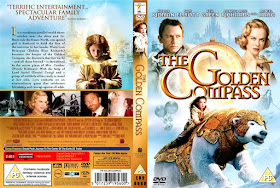 The movie, although deviating from the book, isn't that bad at all. In fact, some sequences in the movie make more sense than the one in the book. And a movie is a different medium than a book anyway, so some stuff simply cannot be properly converted to the silver screen. Adapted, yes. Converted, no.

The graphics in the movie were fairly good, believable background, and well casted characters. And Lyra Belacqua is all the silver-tongue she could ever be. (So stop complaining, you critics...) Yes, the movie was somewhat sloppily edited, but it worked for me.

But what is it all about?

Heavy stuff, not for the faint of heart, and definitely not for the overzealous religious crowd that cannot differentiate between fantasy, entertainment, and religion. And yet, I think it is quite readable for teens.

I was expecting a lighthearted action adventure (probably because I saw the movie before reading the books) and not a heavy brick dealing with:


I may have left out a few other minor topics...

Book 1 and book 2 are regular fare, with a few interesting twists. Book 3 is a different beast. In it Pullman opens the abyss and almost desperately unloads his philosophical conviction upon the reader. He manages to tie up all story-lines (in what I think is a very well executed retrofit).

Nevertheless, a good read (or in my case a good 'listen' as I've done the audio version) but you may want to consider the age of the reader carefully, and (strongly) religious readers may object (some of the) topics and execution.

Again, I did not read this book, but listened to it. Which can be just as much fun. In a car. Where reading a book, whilst driving, may result in a serious decrease of one's expected life span. So take care. Still, audiobooks are a great way to spend your that part of your life spend in traffic jams...

Unfortunately, my control over the English language, or a strange form of acoustic incompatibility, makes it impossible (well, 'hard') for me to listen to certain audio books. I've tried to listen to some Terry Pratchett audio books read by Stephen Fry, and at first I couldn't understand half the text without paying extreme attention. Now, what's the purpose of an audio book (in a car) if you have to concentrate on all being said? (Since then I've gotten better at understanding 'British', but there's still stuff out there I can't make head nor tail of.)

In this case Philip Pullman himself, author of the His Dark Materials series, narrated the audio books. (With supporting cast.) And although the original books were perhaps aimed at a younger audience, and although I haven't read the printed version yet, and although I typically don't like multiple narrators in an audio book... in spite of all those althoughs this unabridged audio book version is superb. I've been listening to it on my regular one hour plus commute and the same one hour plus in the evening to return home. Clearly pronounced, sufficient slang to be believable. Perhaps Lyra's voice is whining a little too much, but thus far it does match her book's character.

The last book finished many of the arcs, and answered many questions, but it still left open quite a bit... Here's what I wondered about: 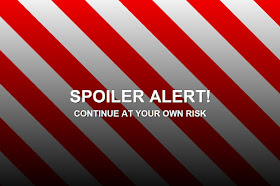 1. What's the use of father Gomez? He's killed by the remaining angel at the end, but doesn't seem to do much more except being killed... It also seems the author was planning on doing 'something' with the white killer birds, but in the end he did not... Weird.

2. Why were neither father Gomez nor Mary Malone attacked by the Specters in Citagazze? Can Specters travel through these inter-dimensional windows? (Yes, they can, as they showed up in the world of Lord Asriel's new republic). So, why did they not overrun all worlds? How could a delicious morsel like Marissa Coulter ☺ control them? Why did the Specters cooperate with the Authority, and perhaps even more so, the other way around? They got nothing in common...

3. Why did the dead end up in the world of the dead? Who's the ferryman? If it's all a plot of the Authority, then there must have been some means to channel all the ghosts to that world. Which, in turn, would mean that the 'bypass' Will and Lyra created is not a fix, just a patch ☺

4. What happened thirty two thousand years ago? A revolt, yes. But how many revolts took place? Although not explicitly mentioned, it looks like there may be a certain set of events that might be repeated now and again. If so, why did no one realize the impact of windows on Dust during all previous cycles? Was this the first cycle that involved windows, and were devices like the Subtle Knife not earlier in play?

5. I don't like unhappy endings, and although the kids saved the world, they paid for it... Unable to see each other again. Or... perhaps... The angel hinted at other ways to travel the worlds, for example the way the angels themselves did though she does not explain how or what. I've also seen some people talk about the 'Intention Craft' as if it was high technology, but what if it wasn't? What if the intention craft is exactly that, a craft that turns intentions into actions? If such a device can move instantly within a world, why would it not be able to do so between worlds? Come to think of it, what powered the Authority / Metatron's Chariot / Clouded mountain?

6. Horrible name for a villain... Metatron... I was thinking Autobots and Decepticons every time that name came up...

Nevertheless, a good read featuring gay angels... that was a first!